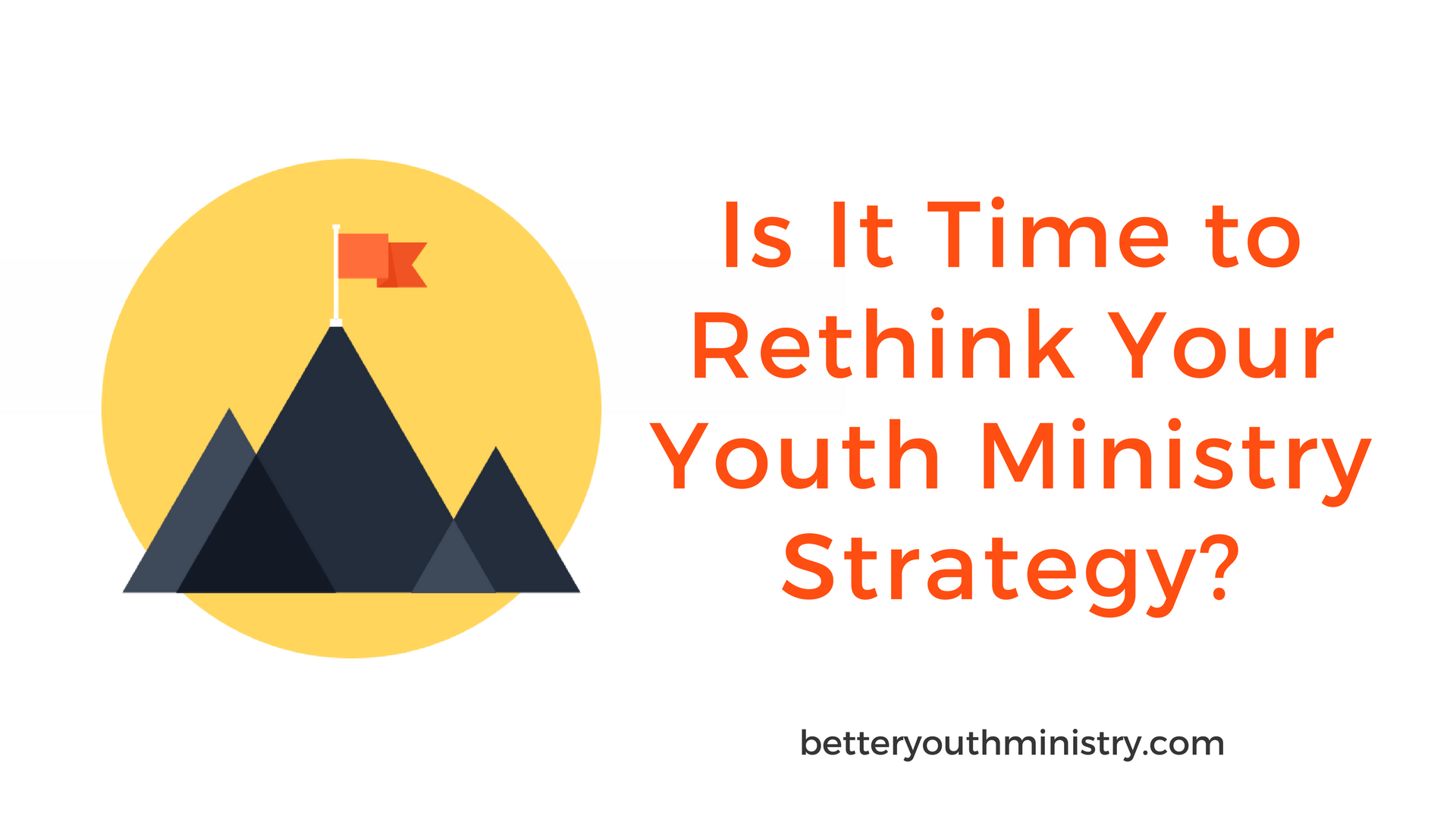 As a youth pastor, you are kind of like a Sherpa.

A Sherpa is a guide who helps people climb Mt. Everest. The trek is too dangerous to make alone, so a Sherpa’s help is enlisted to point out the dangers and lead the climbers up the path to the top of the mountain.

That’s similar to what you’re doing with your students.


Your students are on a journey of faith.

And each student is at a different place on the journey. They are all at different points along the path. But most of them don’t know the way forward. That’s why they need you.

Most of them don’t know what the spiritual mountain peak looks like. But you do. (If you don’t, then you probably won’t be a very helpful guide. But that’s a different topic.)


What’s at the top of the mountain?

I would say that the top of the mountain, the destination to which the path leads is leadership. That might surprise you. It shouldn’t. I like the way that Henry and Richard Blackaby define leadership, especially in a spiritual context.


Why is spiritual leadership at the top of the mountain?

Because leaders are the ones who (1) listen to God’s voice, (2) live by God’s standards, and (3) lean on God’s power. Leaders lives are marked by an openness to learn and love all they can.

Can you imagine anything better than that for your students? I can’t. That’s why it’s at the top of the mountain. Those who make it to the top are your core students.


What’s at the bottom of the mountain?

A crowd of people is usually standing around at the bottom of the mountain. But they shouldn’t be criticized for that. Can you imagine a Sherpa walking up to someone at the bottom of Mt. Everest saying, “Get climbing or get out of here!”

You don’t know what is going on in the hearts and minds of the people in the crowd. Maybe they’ve come just to watch and feel inspired. Maybe they have a friend who is climbing, and they wanted to see him do it.

Do Sherpas get frustrated with the crowd?

A sherpa wouldn’t get frustrated with the crowd at the bottom of the mountain; he would talk with them, engage them, and guide them to possibly consider climbing for themselves.

You never know why the crowd is there. Just be glad that they’re there and not somewhere else. Being in the presence of the mountain and the other climbers is sometimes enough to inspire a few members of the crowd to consider taking up climbing for themselves.

That’s a good thing. Let the people in the crowd weigh the cost. Someone doesn’t usually go immediately from watching his friend climb to running up and starting to climb himself.

It’s a process.
It starts with an idea: Maybe I could do that.
It becomes an interest: I need to think more about that.
It turns into an investigation: I need to find out how to do that.
It culminates in an intention: I will do that.

At that point, the former crowd member gets some gear and joins the group of climbers on the mountain.


What’s in the middle?

The top is the core. The bottom is the crowd. What’s there in the middle of the mountain?

The middle of the mountain is where community forms. If you look, you’ll see various places on the mountain where groups of climbers have joined together. Bonds are strengthening. Commitment is deepening.

A real sense of camaraderie forms among fellow climbers on their path to the top. They discover that they are not alone on this journey. It’s not every man for himself. They are on this journey together.

Some climbers, maybe many climbers, will turn back when the conditions get tough. It shouldn’t surprise you when some of your students turn back and decide it was easier and more fun when they were just standing around on the ground with the crowd.

But don’t get too discouraged about it. After a while, those same students who backed away from the challenge might gather up their gear and start to climb again. You’ve probably started something, stopped, and then started again. Why couldn’t a student do the same thing? It actually happens like that all the time.


What is the youth pastor’s job?

I think the youth pastor’s job is to be like a Sherpa who helps, guides, and assists the members of the crowd to become part of the community and end up in the core at the top of the mountain.


Is it time to rethink your youth ministry strategy?

Most ministries try do accomplish too much in each of their programs. Because they have good intentions, they try to include something for everyone. However, they end up offering everything to no one.

There’s a reason that Chick-fil-A doesn’t serve hamburgers. Hamburgers aren’t bad, but they would clutter the menu, confuse the customers, and diminish the brand. If Chick-fil-A decided to offer hamburgers in their stores, they would become just like Burger King.

Burger King lost out when it left its core item: burgers. They tried to have chicken and burgers, and even a fish sandwich on their menu…at BURGER King. It makes no sense, and their brand is weaker as a result of their lack of focus. Chick-fil-A decided that they would focus on one thing: chicken. That seems to be working out pretty well for them.

In your ministry, you want to create programs that have one goal in mind, not five. In a Purpose-Driven context, Doug Fields says, “When you aim at all five purposes in one program, you can’t hit with any power. Instead of hitting the bulls-eye, [you’ll be] spraying shrapnel everywhere” (Purpose Driven Youth Ministry, p. 85).

With reference to the analogy with the mountain climbers that I explained above, does the program exist to move students from the crowd to the community? Does it exist to help students move from the community to the core?

You need to ask and answer those two questions for everything on your menu of programs. You’re the youth pastor, they are the students. You’re the sherpa, they are the climbers. Don’t wear them out with activities that don’t actually lead them up the mountain. Time is too precious and energy is too scarce to waste it on things that don’t move them toward the flag pole at the top of the mountain.

If you don’t ask and answer those two questions, your programs will inevitably miss the mark. Why? Because different students have different levels of interest and different kinds of needs.

If a 7th grader brings his unchurched friend to your Bible study, you shouldn’t be surprised if the unchurched friend started losing interest and becoming disruptive in the 38th minute of your lesson on Joshua and the Walls of Jericho.

You should create the program to do one thing and help one kind of student take the next step. That doesn’t mean that other students can’t attend. It just means that you are upfront about why the program exists and what it aims to accomplish.

Plus, it’s not like hearing about the demands and opportunities of spiritual leadership is a bad thing for people in the crowd. It’s just more appropriate for students in the core.

Don’t get scared by that distinction. Distinguishing between your programs in this way will help you win on two fronts. First, it will help the 7th grader feel even more empowered to invite his friend because he knows his friend will like it. Second, when the friend shows up at the program that is designed with him in mind, he won’t become disruptive because he won’t become bored. He will leave your church that night asking to come back, not telling his friend how lame his church is. That’s a win-win situation that comes from a small change in programming strategy.

Unless your ministry has over 200 students, you should have a decent grasp of who each student is and what each student needs. When youth pastors get discouraged, it’s usually because they are trying to accomplish too much in one program. They try to make the Bible study fun and the outreach event serious.

It creates a sense of having a split personality. Split Personality Disorder is the common term for a condition called Dissociative Identity Disorder. The disorder is characterized by the presence of two or more distinct identities or personalities that continually have power over a person’s behavior.

The frustration comes out in your conversations. How many times have you said something like, “No one cares” or “Everyone is missing the point”? I hear those statements all the time when talking with youth pastors about their students.

What would happen if you zoomed in and thought about each student individually? The problem with big categories like “no one” and “everyone” is that they don’t reflect reality. Sometimes when we say, “No one listened tonight,” what we really mean is that four students didn’t listen and were overly disruptive. Saying, “No one listened tonight” makes you forget about the other thirty students who did listen and weren’t disruptive.

Here’s another example. When we say, “No one cares about students in this church,” what we really mean is that a handful of people didn’t support your big idea or budget request or whatever it is. However, framing the situation that way causes you to overlook several key influencers within the church who do care about students and want you to succeed.

Instead of thinking about your students in those broad categories, I want you to go down to the smallest unit possible. Consider each student as an individual.

Here’s what you need to do:
Open a Google Sheet or an Excel spreadsheet. On the top row, you are going to make seven columns: Last Name, First Name, Grade, Level of Involvement, Their Need, My Task, and Ideas.

For the Levels of Involvement column, your options are:
Crowd, Community, or Core.

For the column that lists Their Need, your options are:
Relationship, Discipleship, or Leadership.

For the column that lists My Task, your options are:
Engage them, Equip them, or Empower them.

Next, go through your roster of students and start filling in the details. If you don’t know enough about a student to determine his or her level of involvement or what that student needs next, then ask his or her small group leader or Sunday School teacher. If no one knows, then leave it blank for now.

Keep going until you’ve considered every student individually. This is part of being a pastor, a shepherd, a Sherpa.


Marks of a Healthy Ministry

As you look at your lists of students and programs, what stands out to you? Is your ministry balanced? Are you too heavy on one focus and too light on another?

If your ministry is missing the mark in any of those areas, it’s time to rethink your strategy. Why? Because your job is to help as many students as possible make it to the top of the mountain. Engage them in relationship, equip them through discipleship, and empower them for leadership. Your programs exist to facilitate that journey for every student.