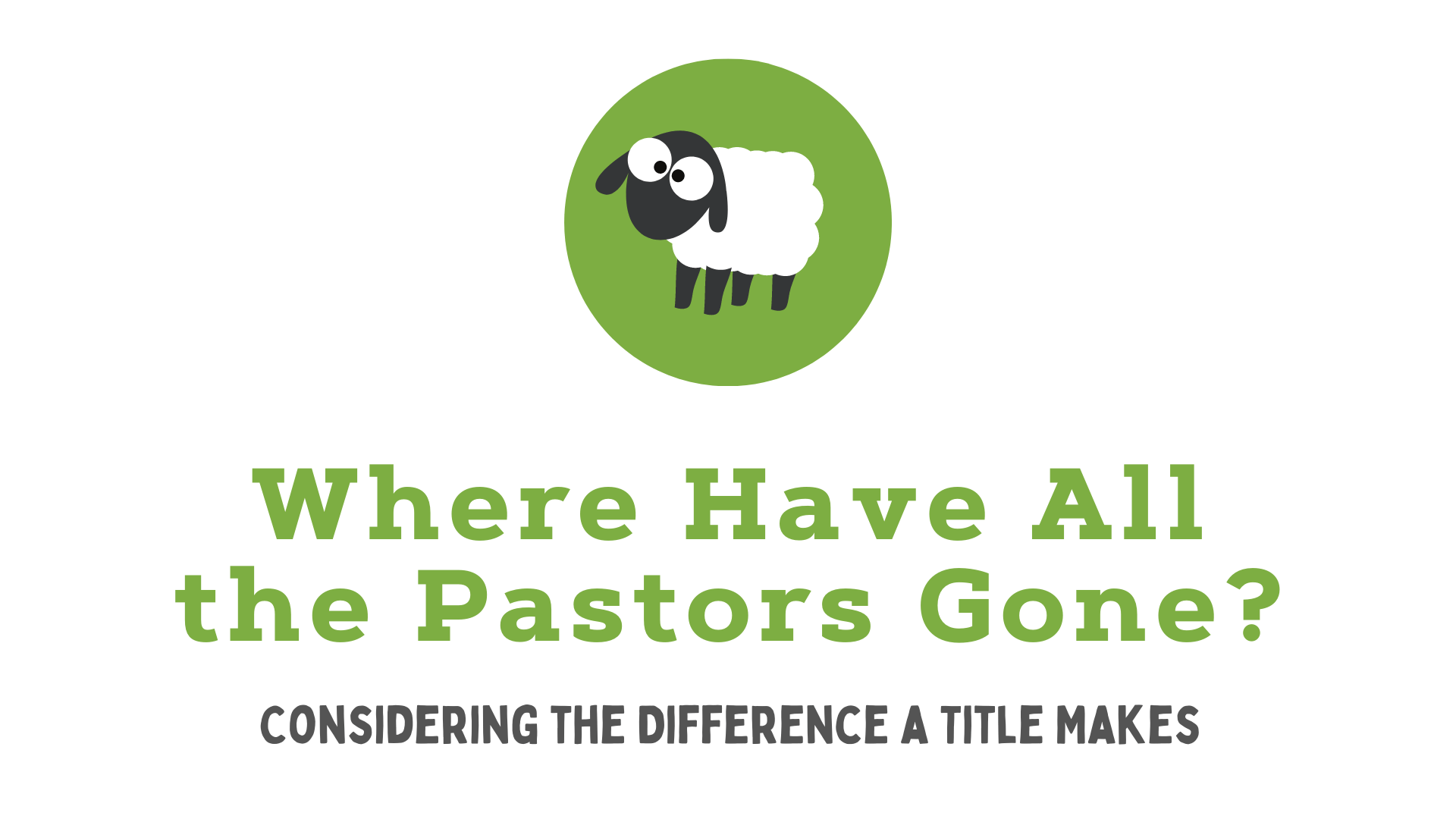 You know, the little by-line beneath your name when you send an email.

Over the last few years, I’ve noticed a trend. I’m seeing fewer ministry leaders being called pastors and more of them being called directors.

For example, a pastor who oversees a student ministry is now called a “Student Ministry Director.” A Small Group pastor is now a “Small Group Director.” This trend seems to be especially prevalent in larger churches that have many people on their staff.

Have you noticed this trend?

On the surface, it doesn’t seem like a very big deal. I’ve actually had both of the director titles that I just mentioned. But I must confess that they never really sat well with me.

The difference between directing a ministry and pastoring people…

Directing a ministry or function invites depersonalization. By definition, a director is someone who is in charge of an activity, department, or organization. Technically, you don’t even have to be a Christian to be a really good ministry director; you only need to have good leadership and management skills. Trust me: There are large churches that regularly employ people who have little to no biblical training or theological education and bear little to no resemblance to the portrait of church leaders given in 1 Timothy 3 and Titus 1.

Pastoring, on the other hand, is inherently personal and spiritual work. In the New Testament, Peter counsels, “Care for the flock that God has entrusted to you. Watch over it willingly, not grudgingly – not for what you will get out of it, but because you are eager to serve God” (1 Peter 5:2). You can’t do that if you aren’t connected to Christ and being empowered by his Spirit.

According to Eugene Peterson, a pastor is a “person placed in the community to pay attention and call attention to ‘what is going on right now’ between men and women with one another and with God” (The Pastor, p. 5). Peterson’s description highlights the inherently personal and spiritual aspects of pastoral work. It takes more than good leadership and management skills to lead a ministry.

The most frequent biblical metaphor for pastoral work is shepherding (Dictionary of Biblical Imagery, p. 783). John MacArthur notes, “Every church leader is a shepherd. The word pastor even means ‘shepherd’” (The Master’s Plan for the Church, p. 16). During his ministry career, Jesus called himself the Good Shepherd and followed the lead of Old Testament prophets in lamenting the fact that the spiritual leaders of God’s people (“shepherds”) were leading people in the wrong direction (see Jeremiah 23:1, 50:6; Ezekiel 34:5; Matthew 9:36; Mark 6:34).

The shepherd is a good metaphor for pastors because shepherds are expected to feed, nurture, protect, and lead sheep. In this same way, pastors are called to perform these same duties for the sake of God’s people in a particular church.

There’s a sense in which what I’m saying can be reduced to semantics. That’s fair. I don’t dispute that. Someone might say, “Pastors have to direct people and Directors have to pastor people. What’s the difference? What’s the big deal?”

I also recognize that in some denominations women are given director titles because they aren’t allowed to be ordained as pastors. That’s not the situation that I’m talking about here. I’m specifically talking about churches that have intentionally removed the word “pastor” from certain job titles that perform pastoral duties.

Ironically, in many of these churches, the senior pastor (or “Lead Pastor”) is still called a pastor while everyone beneath that person is called a director of this or that ministry or function. I wonder why that is. To be consistent, these pastors should be called “Church Directors,” but that’s not usually what happens. Of course, I immediately think of Erwin McManus, a lead pastor who has added “Cultural Architect” to his title.

I admit that I might be making something out of nothing. But I think the distinction between pastors and directors has an effect on what church leaders see as their primary role or function in the church. If I see myself as a director who also happens to be a pastor, then I will be more inclined to focus on programs, processes, and production than I do on people. This happens at more churches than we would like to admit.

On the other hand, if I see myself as a pastor who also happens to direct a particular ministry (or particular aspects of a ministry), then I will be more inclined to prioritize people over everything else. I think that’s how it should be. After all, programs, processes, and production are good, but they aren’t the point of what we do. They are merely the means to an end.

The end to which our efforts are aimed is that God’s people would be maturing in faith, unified in spirit, and equipped to do the work of Christ in the church and throughout the world (Ephesians 4:11-13). This work is personal. This work is spiritual. This work is pastoral.

Do I think that it’s wrong for pastors to be called directors? No, not in any moral sense. But our words shape our worlds. Therefore, I think it is wise for ministry leaders to be called pastors, not directors. If nothing else, this helps keep the unique nature of our work at the forefront of our minds.

In his book, Escape from Church, Inc., E. Glenn Wager insists, “Our people are crying out for shepherds. They’ve had enough of leaders. They’ve had their fill of CEOs. They’re sick to death of managers. What people really want – and really need – are pastors who long to be shepherds of God’s flock” (p. 111). He wrote those words in 2001, but they have largely been ignored to our own detriment.

To be sure, I think that churches can learn a lot from businesses and other organizations that strategically accomplish their objectives. Church leaders can also learn a lot from leaders in other fields who have mobilized people to work together. I’m not opposed to that. I’ve written several posts to help youth pastors apply general leadership principles and be more effective in their ministries. But we must always remember that our work is distinct.