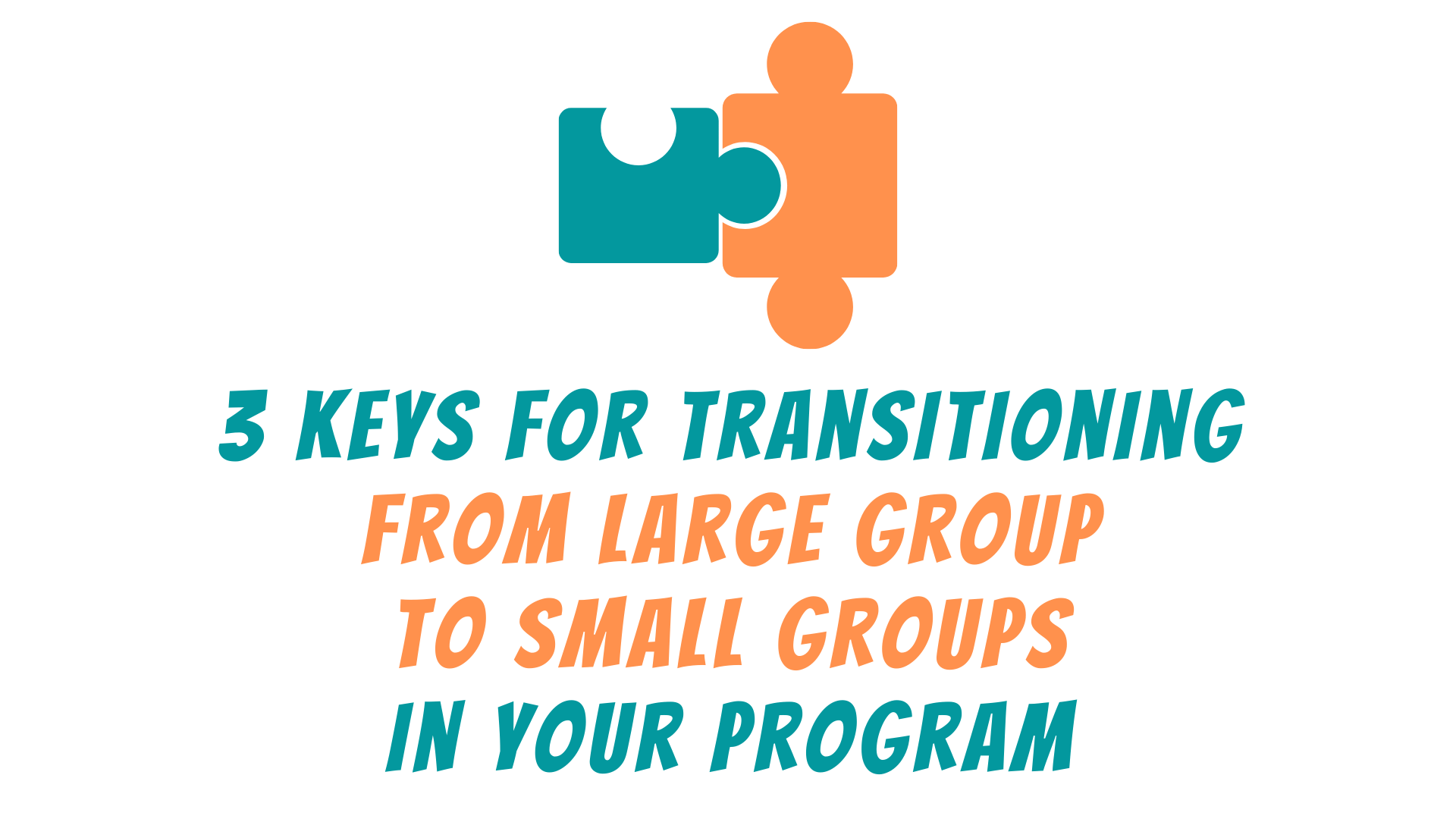 Every fall, a new group of recent high school graduates leaves home and arrives on college campuses. It’s a moment that many of them have looked forward to for many months, if not years. And yet, few of them are aware of how complicated the transition can be.

A college student at the University of New Hampshire admitted, “Moving on to college from high school life was tough.” She pointed to demanding classes and difficulty making friends as part of what made the transition so hard. She also gave a few practical tips to help other students transition well: Be patient with yourself, try new things, and find like-minded people.

Unfortunately, I’ve observed many youth ministry programs that have a similar difficulty when it comes to transitions, particularly going from large group time to small group time.

I can remember a few years when a new approach showed up in youth ministry programming. Instead of doing a large group gathering and then small groups on different days of the week, youth pastors started combining into the same program, back-to-back. There are several reasons why this shift happened (one of them being the increase of over-scheduled, frantic families who aren’t willing or able to attend church on any day other than Sunday), but my point here isn’t to critique it. My point is to help those of you who do large and small groups in the same program to make the transition as smooth as it can be.

You don’t want to do a great job while everyone is together and then have everything fall apart as soon as you send students to their groups. So, these tips are essential for making the most of your limited time.

1. Give them the first question.

When you’re done with your message, simply announce that they’re going to their small groups next and tell them the first question that will be asked to get the conversation started when they get there. The question should be an easy, light-hearted question that everyone can answer. You don’t want to have the first question be something like, “What’s the biggest lie you told your parents this week?” That won’t get them talking.

In The Art of Group Talk, Tom Shefchunas and Jeremy Zach suggest that “the best kinds of questions are questions that ask your [students] to share their experiences, their opinions, their observations, and their ideas” (p. 107). I recommend tying the question back to something that was said or a story that was told in the message. An easy template to build on is: “What comes to your mind when you hear about ___________?” This is a good question because there aren’t any right or wrong answers and it has the potential to create conversation.

Beyond that, giving them the first question ahead of time will allow students a little extra time to think about what they might say. That will help them feel more comfortable than putting them on the spot and asking them to come up with an answer in the moment. Also, giving them the first question creates continuity between the two parts of the program. It shows that the small group discussion will be a continuation of the large group time.

2. Give them some buffer time.

There’s no need to rush them into their groups (unless you’ve mismanaged the time). Let them have a few minutes to stretch their legs and socialize. If you’ve ever been on a middle school or high school campus when the bell rings and students change classes, then you’ll understand why this is helpful. Give them a few minutes to chat with each other and they’ll be engaged in the small group when it starts. Plus, those few extra minutes will allow your message to sink in a little more before they’re asked to discuss it.

Also, tell them that this is the time to go to the restroom or grab a snack if they want to. That way, they don’t interrupt the small group time by asking to do those things a few minutes later. One of the youth pastors I coach asked how to get them to their groups after you’ve given them this kind of buffer time. The easiest way is to play a five-minute countdown timer on the screen. Let them know that you expect them to be in their groups when the timer is done.

3. Give direction to new students.

Not knowing where to go is no fun. It’s especially not fun when you’re new and don’t know who to ask about where to go. So, before you turn up the volume on the Spotify playlist, say something like, “If you’re new or just don’t know where to go for a group, come see me and I’ll get you pointed in the right direction.”

That reassurance will help new students feel more comfortable and you’ll be able to walk them over and personally introduce them to the small group leader.

Transitions can be tough. If you do them wrong, you can lose your momentum and undercut your efforts. If you’ve adopted the strategy of going to small groups immediately after your large group, then these ideas will help you make that transition as seamless as possible.

Once again, the three keys are:
• Give them the first question.
• Give them some buffer time.
• Give direction to new students.

Do you have a tip to make the transition from large group to small groups even better? I’d love to hear about it. Let me know in the comments below!