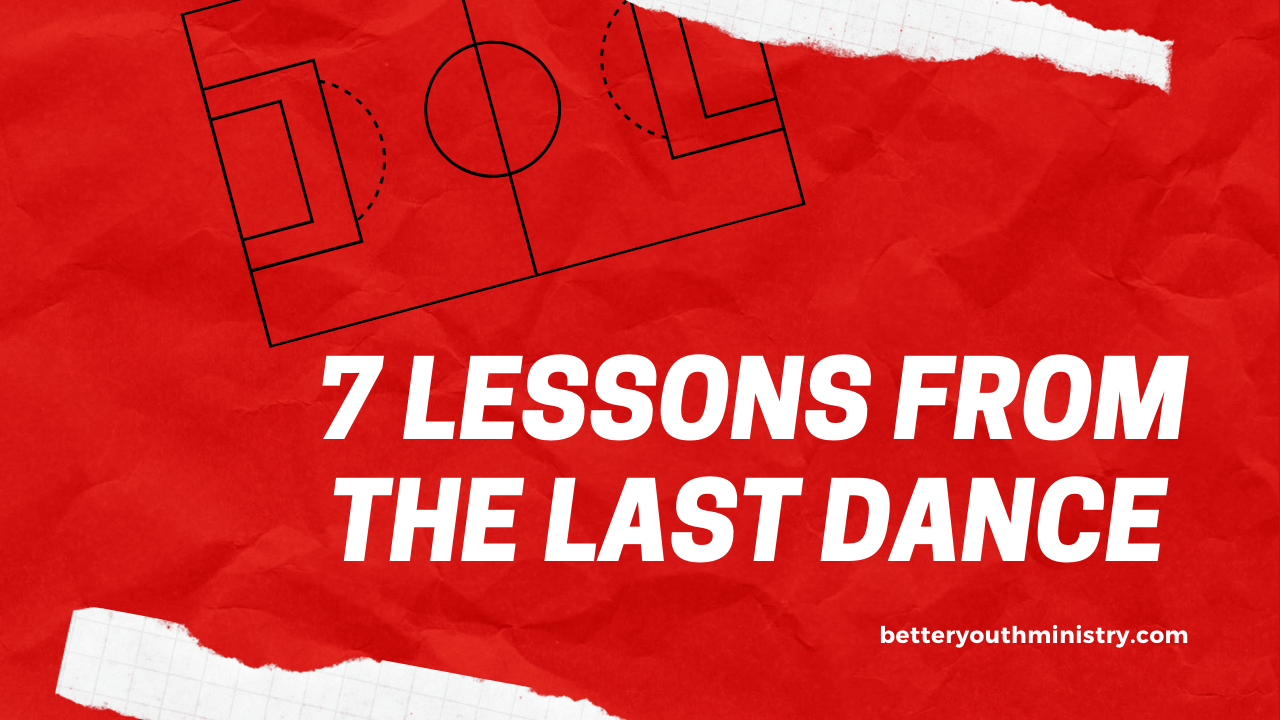 Have you watched The Last Dance yet?

It’s the docu-series about Michael Jordan’s career. Specifically, it narrates his final season with the Chicago Bulls as they try for their second three-peat of NBA championships.

You don’t have to be a sports fan to appreciate the series.

It’s relentlessly raw and personal. Jordan himself, along with past teammates and others, offer their unfiltered commentary about things that were happening in those years. There’s a real human element to it. Personalities class, feelings get hurt, and dreams aren’t reached. But, true to life, there are many good moments that also happen along the way.

Maybe you can identify with that.

Life dishes out good times as well as hard times, no matter who you are: NBA player or youth pastor.

We can always learn from successful people and teams, so when I finished watching the episodes, I thought about what I had witnessed. I was able to identify seven lessons from The Last Dance for youth pastors. There are probably more, but these are the ones that stand out most to me.

1. Groups can be turned around.

Before 1991, the Bulls had never won an NBA championship. They went through seven different coaches between 1976 and 1985, and the players were less-than-committed to their craft.

But Michael Jordan knew what it was like to win. At UNC, he was coached by the legendary Dean Smith and had scored a buzzer-beating shot to win the 1982 NCAA championship.

When the Bulls drafted Jordan, it was a turning point in their franchise. It took some time to turn things around, but Michael Jordan taught the Bulls how to be champions.

Pro Tip: If your ministry is in need of a turnaround, don’t give up. Lead them to where you know they can go!

If your ministry is in need of a turnaround, don’t give up. Lead them to where you know they can go!

2. Surround yourself with a balanced team.

Before the 1991 championship, Jordan had won numerous personal awards but the Bulls still hadn’t won a championship. Winning a championship would take a team. Today, it’s hard to talk about the Bulls’ success without also mentioning Scottie Pippen.

The Bulls added Pippen in 1987, along with Horace Grant and some three-point shooters. The team was balanced, and Jordan trusted his teammates to do their jobs. The result was the team’s first championship in 1991.

Later, in 1995, the Bulls found themselves in need of some roster changes. They were struggling on defense and desperately needed some help with getting rebounds. They added Dennis Rodman to fill the role.

Rodman was then instrumental in the Bulls’ next three championships. Sure, Rodman was odd and unpredictable at times, but his skills and effort on the court complemented what the Bulls already had in place.

Pro Tip: Look for volunteers who can make your ministry better.

Look for volunteers who can make your ministry better.

Prior to the Bulls, Jackson coached in the Continental Basketball Association as well as the professional league in Puerto Rico. He had a track record of winning. Then, when he started with the Bulls, Jackson introduced a system called the triangle offense. The system was instrumental in the Bulls’ championships, and then Jackson used it later to win five more championships with the Los Angeles Lakers. A good coach and a good game plan made a big difference for both teams.

Pro Tip: A good coach can help you level-up your ministry.

A good coach can help you level-up your ministry.

BY THE WAY…
IF YOU WANT TO MOVE YOUR MINISTRY FORWARD, I CAN HELP. CHECK OUT MY COACHING PAGE AND BOOK A FREE STRATEGY SESSION WITH ME.

Michael Jordan took basketball seriously and excelled on the court. When it was time for a practice or game, he was focused and ready. But he also found ways to get away and cut loose. One of the ways he did that was by playing golf.

Jordan was introduced to the game of golf by Davis Love III, his classmate at UNC. He started by driving the car and tagging along with Love on the course. Slowly, his curiosity and competitiveness moved him to out of the cart and onto the course.

He loved the game, so he kept practicing and playing. Golf gave Jordan a way to escape the pressure-cooker environment of the NBA. He says, “It’s been a place where I’ve been able to get away from all the noise, and I desperately needed that” (source: RSNG.com).

Pro Tip: Refill your emotional tank because you can’t help people when you’re running on empty.

Refill your emotional tank because you can’t help people when you’re running on empty.

Something that stood out to me in The Last Dance was what Jordan said to Phil Jackson in the last episode. They had just won their final championship together and Jackson asked, “Did you think we could do it?” Jordan replied, “I knew we would do it!”

An NBA season is long and grueling. Teams travel thousands of miles and players spend countless nights away from their homes and families, not to mention the demand for attention from fans and media. It can wear a person down mentally.

That’s why Jordan’s response to Jackson stood out to me. Reporters hounded his every move all season long. The naysayers said the Bulls’ run was over. But he was undeterred. Through it all, he was locked-in and focused on the goal: winning their sixth championship.

Pro Tip: If you don’t believe in what you’re doing, neither will anyone else.

If you don’t believe in what you’re doing, neither will anyone else.

When Jordan returned to basketball after a brief detour into minor league baseball, he had a long way to go to get back into playing shape. It was the summer of 1995, and he was also scheduled to film the movie Space Jam.

To do it all, Jordan worked on the movie from 7am to 7pm, with a two-hour workout in the middle of each day. Then, when filming was over for the day, other NBA players would join him to play pick-up basketball games until 10pm.

The other NBA players were in awe of Jordan’s work ethic that summer. Reggie Miller, a Hall of Fame player who played in the pick-up games, said, “I don’t know how he did it. I don’t know ho he had the energy to film all day and then still play three hours . . . This dude was like a vampire for real.”

Pro Tip: Success requires sacrifice. When you say “yes” to something, you have to say “no” to something else.

The Bulls knew that the 1998 season would be their last season together. Jerry Krause, the team’s general manager, told Phil Jackson that Jackson wouldn’t return for the next season even if the team went 82-0 that year. That’s why Jackson’s theme for the season was “The Last Dance.”

After they won the championship, Jackson and Jordan retired. Scottie Pippen was traded and Dennis Rodman was released. Jordan thinks they could have brought everyone back for one more run at a championship the next year, but that’s not what happened. Instead, it seems like everyone (including those who watch The Last Dance) is left wondering, “What might’ve been?”

Pro Tip: Leaving your ministry too early will leave you with regret.

Leaving your ministry too early will leave you with regret.

Michael Jordan is arguably the greatest basketball player of all time. While his personal vices might not be things you consider worthy of emulating, his passion, skills, and drive to excel at basketball are worth remembering.

Watching The Last Dance reminded me of how great Jordan really was in his era. Because of his ability to win consistently, those of us who want to make a difference in youth ministry should learn what we can from Michael Jordan.

Once again, here are the seven lessons that I took away from The Last Dance:

• Groups can be turned around: Lead your ministry to where you know it can go.
• Surround yourself with a balanced team: Look for volunteers who can make your ministry better.
• Get the right coach: A good coach can help you level-up your ministry.
• Find ways to get away: You can’t help people when you’re running on empty.
• Guard your thoughts: If you don’t believe in what you’re doing, neither will anyone else.
• Do the work: Success requires sacrifice.
• Don’t give up too soon: Leaving too early will leave you with regret.

Which of these lessons is the most important for you right now? Also, if you’ve seen The Last Dance, what lessons would you add to the list?