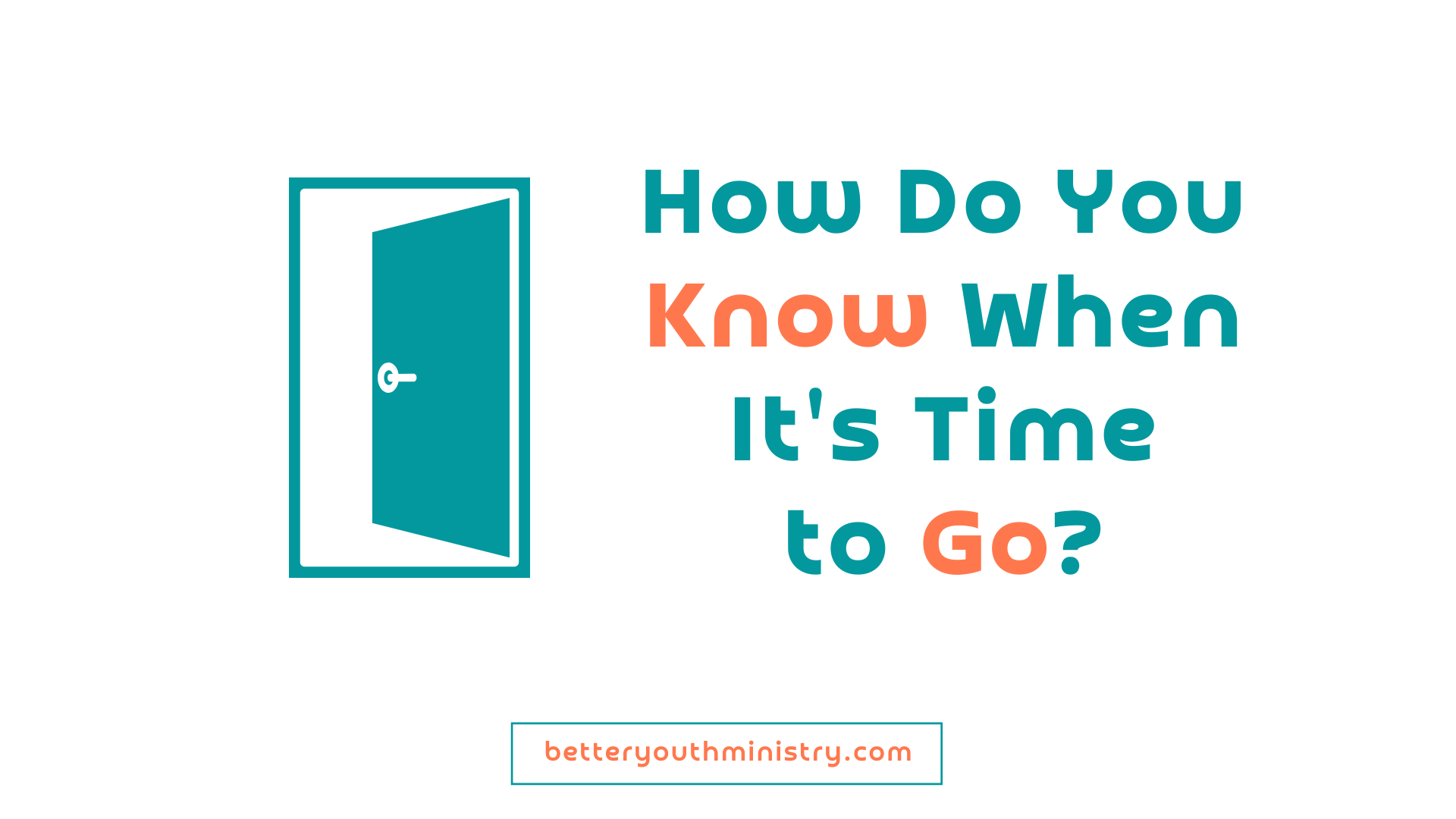 Have you ever had that moment?

You’re driving home on Sunday after church. Everything was okay, pretty much the same as every other week. But something shifted in you.

You call another youth pastor from across town. Maybe he’ll reassure you. He doesn’t answer. For the rest of the day, you wonder what’s next. Should you stay or should you go?

How do you know when it’s time to go?

5 Signs that It’s Time to Go

In their book, Next: Pastoral Succession that Works, William Vanderbloemen and Warren Bird explain five different signs that you should pay attention to.

This is one of the most common reasons why youth pastors choose to move on. Basically, the stress, the pace, and the demands are weighing too heavily on you and your family. Before you reach your breaking point, it might be best to move on.

However, I would tell you to have a conversation with the senior pastor about your situation before make a hasty decision. Sometimes a conversation like that will be enough to give you the breathing room you’re looking for.

Before you reach your breaking point, it might be best to move on.

This could be just a seasonal and temporary feeling. Like I said above, sometimes this is best resolved by a conversation with your senior pastor and some time off. However, if you’re not passionate about the students, the ministry, or the church for an extended period of time, that’s an important sign that you (and they) might be better off with someone else in your position.

So much of leadership is about relationships and trust. Once trust is lost or broken, it’s very hard (but not impossible) to get it back. Lack of trust makes people suspicious of your plans and intentions.

Or, perhaps they doubt your skills. They no longer think you can lead the ministry to where they want it to go. This situation can quickly become a breeding ground for dissension, and it creates an almost unworkable situation for the future.

Lack of trust makes people suspicious of your plans and intentions.

Because churches are dynamic and not static, things are always in motion and in flux. Maybe you joined the staff under one pastor and now there’s a new pastor. Your vision was aligned with the previous pastor’s vision, but you can’t get on board with the new pastor’s vision.

Or, perhaps the community’s demographics have shifted. Maybe you’re no longer the right person to reach out and minister to the young people who currently populate your town.

5. God calls you somewhere else.

This is the most important sign that it’s time to go. However, it has been abused by many pastors to justify their career aspirations. A student once told me, “It seems like God always calls people to churches that are bigger than ours.”

That observation is unfortunate, but it doesn’t negate the fact that God uses various means (including the previous four signs mentioned in this post) to signal to a pastor that is time to move on.

Whatever the reason, God can and does call people to other places and other assignments. Be open to that.

God can and does call people to other places and other assignments.

Stepping down and leaving your church is never easy. The students you’ve impacted will seldom understand your reasons. They might even shed a few tears.

I had a really difficult time leaving one church because I thought it would derail everything we’d built together. Even though I had clear signs everywhere pointing to the fact that it was time to go, I still wavered.

Eventually, I left and the next youth pastor came in, picked up where we’d left off, and led them even further. My fears were all for nothing.

Consider these signs, talk with friends, and spend time in prayer before you decide what you should do. Once again, the signs are:

If you’re wondering if it’s time for you to go, don’t decide alone. Schedule a call with me and let’s talk about your situation. Leaving isn’t your only option, and I can help you chart a path forward.