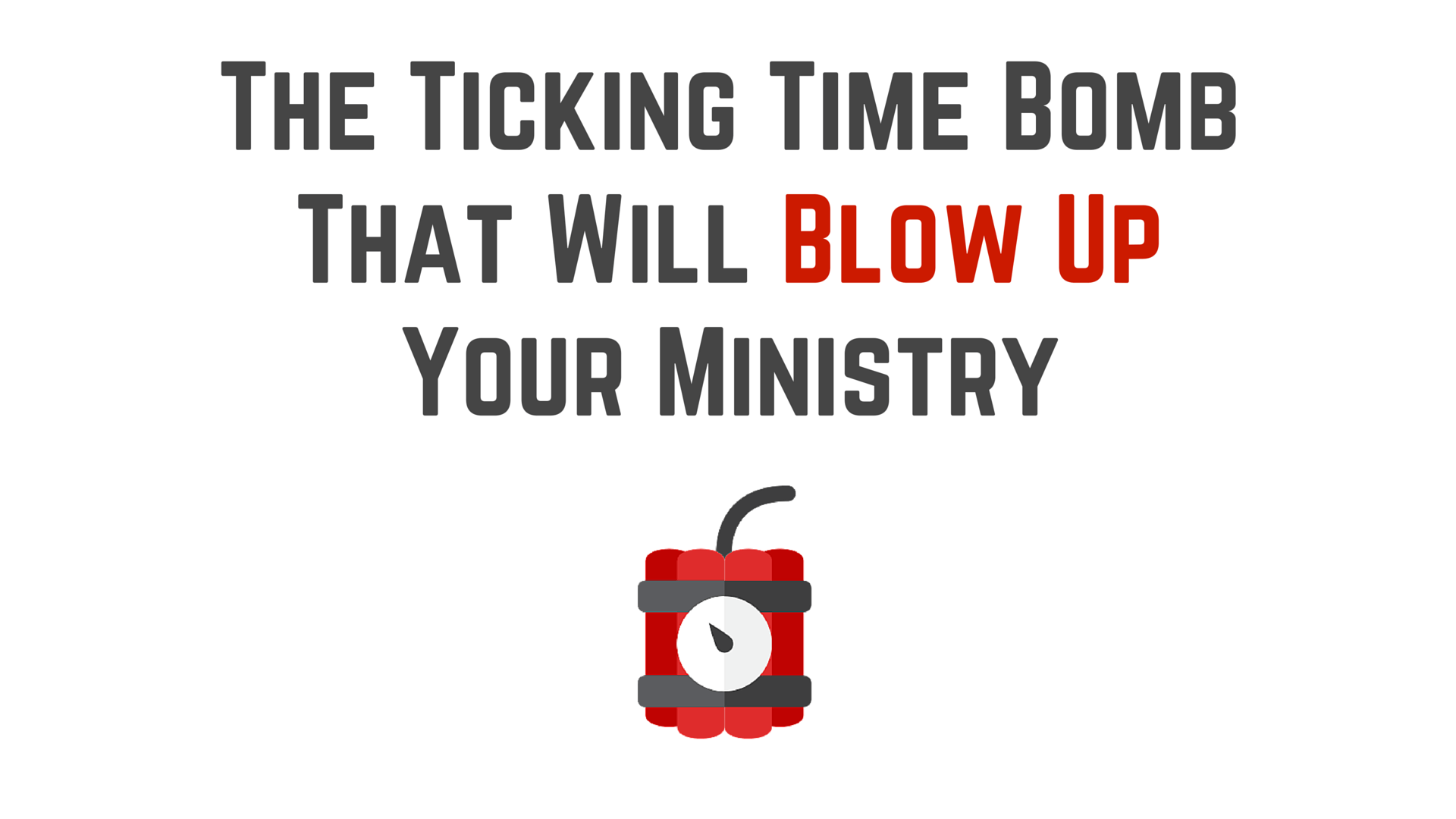 My kids are out of school for the summer, so we like to take walks around our neighborhood after dinner.

Well, I should clarify:
My wife and I walk. My kids ride their bikes.

But last night, my son was riding his bike down the road and one of his pedals fell off!

Can you ride a bike without pedals? So I tried to screw the pedal back on with just my hand. No luck. It didn’t work. I really needed a wrench to get it back on.

With that, he had to walk and push his bike all the way back to our house. That was definitely not fun for him. He needed those pedals because he didn’t want to walk his bike, he wanted to ride his bike.

The whole episode got me thinking:
A pastor without character is like a bike without pedals.

And yet, concern for character seems to get lost in the weekly rush of planning and preparing for the programs that keep our ministries going.

“I haven’t prayed in almost 7 months.”

A youth pastor confided in me recently that he hasn’t really prayed in almost 7 months. Sure, he’s stood up on Wednesday nights and opened up the program with a prayer. He’s ended the time with a prayer. But prayer hasn’t mattered to him personally.

How can that happen?

It happens all the time.

But we see it happen all the time. A few weeks ago, I came across a story about 2 pastors in Tennessee who were arrested for soliciting sex with underage girls. One of them was a Children’s Ministry director.

I’ve worked at a church where the senior pastor had a moral failure. It’s not pretty.

How does that happen?

In this post, I want share 3 things about character because I want you to understand what’s at stake with every choice you make. Lack of character is the ticking time bomb that will blow up your ministry.

Your future – both personally and professionally – is on the line. Your legacy – how you’ll be remembered and talked about – is up for grabs. Your character is too important to leave to chance.

First, we’ll ask, “What is character?”
Then we’ll look at how character is formed.
Third we’ll answer the question of “Why do pastors blow it?”

We get our word “character” from the Greek word kharakter, which meant, “engraved mark” or “imprint.”

Even so, character is a slippery word to define. Before he offers his own definition of character, Andy Stanley observes:

“All of us can name various traits that a person with character demonstrates. But what is character? You think you know. I think I know. Your neighbor thinks he knows . . . In your pursuit of character, you will find many obstacles along the way. Defining it is the first one” (Like a Rock, 25).

What is the definition that Andy settles on?

He says, “Character is the will to do what is right as defined by God, regardless of the personal cost” (Like a Rock, 29).

Or how about this definition from Dallas Willard:
“Character is the largely fixed accumulation of beliefs, and inclinations to behave in certain ways in particular circumstances” (A Dallas Willard Dictionary, 37).

I’ve also heard it said that “Character is who you are when no one is watching.”

The theme in these definitions is that character has to do with your inner world – your thoughts, convictions, will, intentions, attitudes, beliefs, loves, hates, and desires. It’s the core of who you are.

How is character formed?

Let me explain. With the head, we think. We direct our attention. And you know that when you give something your attention, you move in that direction. That’s why it’s so important to monitor your thoughts:

“Fix your thoughts on what is true, and honorable, and right, and pure, and lovely, and admirable. Think about things that are excellent and worthy of praise” (Philippians 4:8 NLT).

With the heart, we feel. We experience emotion. But emotions can get you turned upside down and backward. That’s why Andy Stanley says:

“To become a leader worth following, you must give time and attention to the inner man. To leave a legacy that goes beyond accomplishment alone, a leader must devote himself to matters of the heart” (The Next Generation Leader, 152).

With the hands, we act. We do things. We act on the hundreds of small choices that we make every single day. C.S. Lewis observes:

“Every time you make a choice you are turning the central part of you that chooses, into something a little different from what it was before” (Mere Christianity, 87).

Your character is under construction. Your head, heart, and hands are the raw materials that are being used to build it.

Why do pastors blow it?

I remember when I first heard about the Ted Haggard scandal. I was caught off-guard. Haggard was a major leader in the Evangelical church. How does that happen?

I think pastors blow it for 3 reasons:
1. They stop listening to their own sermons.
2. They have limited (or no) accountability.
3. They are leading on empty.

But that’s not what I’m talking about here. Here, I mean that they stop preaching to themselves. They are more concerned with delivering a sermon to others than applying it in their own lives. That’s why they are able to say all the right things.

Writing sermons is a skill, and they know how to do it well. The problem is that they are no longer practicing what they preach because they’re no longer listening to what their sermons say.

The second reason pastors blow it is that they have limited (or no) accountability. Being a pastor is very different from having a regular, 9-to-5 job. Trust me, I’ve done both.

In a regular job, you have a place where you’re expected to be all day. There are tight controls on spending and expenses. But most church jobs aren’t like that. There is tremendous freedom. You can come in late and leave early if you want. You get reimbursed for expenses even if you “forget” to turn in your receipt.

But the higher up you go, the less accountability there seems to be…at least that’s how it seems to be in most of the churches I’ve been around. Excessive freedom and available funds create a strong temptation for a pastor without accountability.

The third reason is that pastors are leading on empty. In their book, Pastors at Greater Risk, H.B. London, Jr. and Neil Wiseman give these staggering statistics:

* 90% of pastors feel like they’re not adequately trained to deal with the demands of ministry.
* 80% of pastors believe that ministry has a negative effect on their families.
* 80% of pastors say they have insufficient time with their spouse.
* 70% of pastors do not have someone they consider a close friend.

It’s no wonder that Wayne Cordeiro writes, “Most of the people in our churches have no idea how demanding ministry can be or even how demanding they can be” (Leading on Empty, 33).

Pastors are burned out. They’re leading on empty. And that makes them susceptible to a great fall. That’s a major reason why they blow it.

Is there anything that gives you a reason to doubt your character today?

If you aren’t listening to your own sermons, start. You need to do what you’re telling everyone else to do.

If you don’t have any accountability, you need to get some. A friend of mine calls this his “Blackmail Relationship.” By that, he means that his accountability partner knows so much about him that he could blackmail him if he ever wanted to. Find someone – even if it’s a professional counselor – and get real with them.

If you’re drifting toward burnout, take a vacation. Find a hobby. Read this post. Step away and do what you need to do to recapture your passion because your students need you to be burning bright with faith and passion.