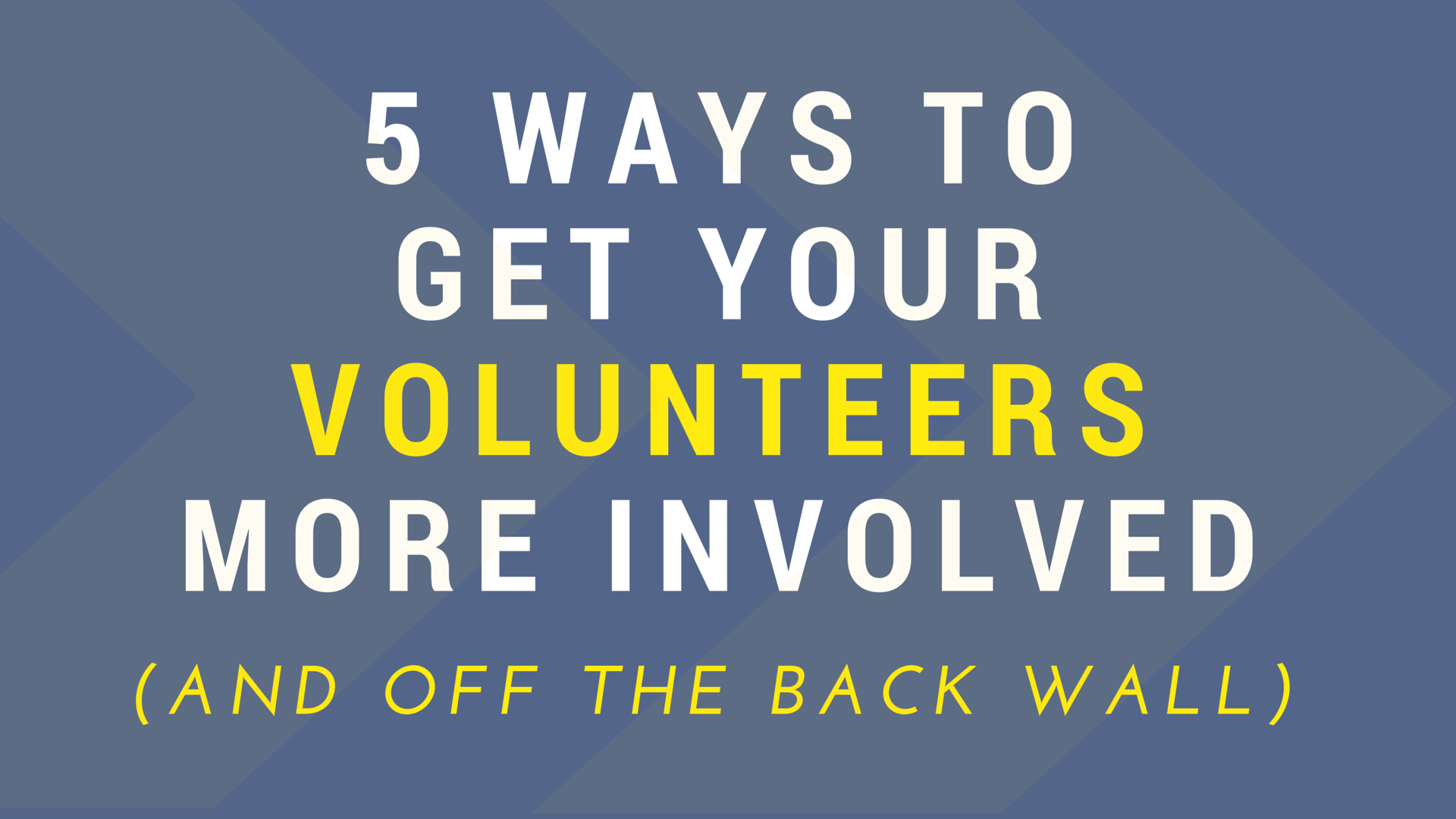 Don’t you hate it?

You try to get your adult volunteers to jump in and sit with the students, but they just stand against the back wall. It’s like the wall has velcro on it and they can’t break free.

Why do they do that?

I think a lot of them do that because that’s how they saw youth ministry modeled when they were younger. Students would be together in the front of the room, while adults talked amongst themselves in the back of the room.

It seemed to work. After all, they’re there, aren’t they?

So, they’re doing what they know.

Other volunteers might just be uncomfortable. They are self-conscious, so they feel like the students will think less of them for joining in with them.

You and I know that’s not the case. When an adult volunteer jumps into the action, it actually has the opposite effect. But they don’t know that.

Here’s one of the biggest reasons why they’re standing on the back wall instead of joining in with the students:
New volunteers take their cues from existing volunteers.

When a new person shows up to serve in your ministry, they learn quickly. If the volunteers who have been with you for a while are standing against the back wall during your program, where do you think the new volunteer will go?

You got it: to the back wall.

How can you change that?

Here are 5 ways to get your volunteers more involved:

“When most organizations or people think, act, or communicate they do so from the outside in, from WHAT to WHY… We say WHAT we do, we sometimes say HOW we do it, but we rarely say WHY we do what we do. But not the inspired companies. Not the inspired leaders. Every single one of them, regardless of their size or their industry, thinks, acts and communicates from the inside out” (Start with Why, 39).

One of the easiest ways to do this is to say something like:

“We believe our message has the power to change students’ lives, so we want to create a place they want to come to. Of course, we can’t compete with every other entertainment option they have. We do our best every week to make our program as appealing as we can, but we recognize our limits. However, there’s one thing we can do better than anyone else: love students. We can create a place where they know they’re known and cared about. That doesn’t happen when you’re over here and they’re over there. It happens when you talk with students as they show up, sit with them during the program, and follow up with them when it’s over. When that happens week after week, you’ll earn credibility with the students and this will be a place they can’t resist!”

If someone doesn’t get inspired by hearing that, then they might not be a good fit for youth ministry.

2. Give them specific instructions.

Andy Stanley says, “Without clear direction, [volunteers] are forced to chart their own course or follow whoever has the best plan at the moment” (7 Practices of Effective Ministry, 72).

Don’t assume your volunteers know what they should do. They probably don’t.

My volunteers range from business executives to stay-at-home moms. But when it comes to my ministry, I’m the expert. They look to me for instructions about what they should be doing. If I don’t give them specific instructions, then it’s my fault when they don’t do what I want them to do.

Give every volunteer a role and a goal.

If you have a volunteer on your Host Team, give them a specific role and a specific goal. Tell them:

“You’re going to be at the front door today. I want you to greet every student with a big smile and a high-five. Tell them it’s an awesome day to be here, and while you’re at it, try to learn 3 students’ names that you didn’t know before today.”

If you have someone working at the snack area, the role could be: keep this area clean and stocked with food. The goal could be to ask 3 students which snack is their favorite.

I had a volunteer who asked that question, wrote down the students’ answers, and then gave them their favorite snack on their birthday. I didn’t ask her to do that; she went above and beyond the call. But it all started with specific instructions. She had a role and a goal.

If you have volunteers who are standing against the back wall during your program, they might see their role as “chaperone” and their goal as “keep students from getting too rowdy.” Your role, then, is “leader” and your goal is to change that. It might be as simple as giving them specific instructions for what to do and where to sit during the program.

Highlighters are useful when you’re reading a book. When you come across something you want to recall later, you highlight it to make it stand out from the other sentences on the page. Then, the next time you pick up that book again, you’ll naturally gravitate to those things you highlighted.

That same thing is true for your volunteers. If you want to reinforce the right actions, then call attention to people who are doing it well. Celebrate them.

This should happen both privately and publicly.

When you catch someone doing something right, let them know it…the sooner the better.

When your small group leader handles a situation with a disruptive student, you could say, “The way you handled that situation was great! I don’t know if I could’ve done it as well as you just did!”

That’s good, but you also want to share those success stories with your other volunteers.

One simple way to do that is by sending out an email the day after your program. Make the subject line: “Wins from Yesterday,” or something like that.

You could include the number of students who attended, number of first-time attenders, names of students who brought friends, and decisions that were made. All of these things are good to pass along to volunteers because it helps them feel like your ministry is accomplishing things.

Include a story about a volunteer who did something good. You could say something like:

“Big shout out to Rich! I saw him talking to a group of 7th grade guys last night. They were all cracking up. I don’t know what they were talking about, but I know Rich left a big impression on them. One guy’s mom already emailed me this morning to say how much her son enjoyed being at church yesterday. Great job Rich!”

There are all sorts of other ways to do this too. You could post a picture of a volunteer on your church’s Facebook or Instagram page. When you have a chance to preach to the whole church, try to include stories of volunteers who are doing it right and making a difference in your message. Be creative.

When you highlight positive examples like that, you’ll see them happening more often. Be on the lookout for ways your volunteers are doing a good job. When you see it, celebrate them both privately and publicly.

Even if you’ve taken the time to clarify your expectations during the orientation process, most of your volunteers forget.

Remember: You think about this stuff all the time. You hang around students, and visit campuses. You’re comfortable in the environment because it’s your natural habitat.

The same isn’t true for your volunteers. They think about their own lives all week. They spend most of their time around other adults. Engaging with students probably isn’t natural to them (even for parents).

Do this every week.

5. Include them in games.

One way to help your volunteers feel more comfortable around students is to get them up on the stage for a game.

This is actually a shift that I’ve seen over the last 10 years of youth ministry. When I started out, I never would’ve thought to include volunteers in games. I assumed games were just for the students. It’s not that way now.

I try to include our volunteers in games a few times every month.

You could team them up with a student to compete against another volunteer and student in a Minute to Win It challenge.

You could pair them with another volunteer to compete against a pair of students in trivia.

Let your volunteers get messy.

In the past, students wanted to be part of messy games. They were willing to put shaving cream all over their face and have cheese balls thrown at them. Today, most students don’t want to do that. But they love to see volunteers do it!

One of the best things we’ve done recently, was to bring a couple of volunteers on stage to play the Pie in the Face game! Our students loved it, and the volunteers had fun too.

Games are an easy, non-threatening way to get your volunteers more involved.

If you want your volunteers to stop standing against the back wall and start jumping in with your students, try a few of these simple strategies this week:

Tell them why.
Give them specific instructions.
Highlight positive examples.
Send reminders.
Include them in games.

I’d love to hear about anything you’ve done to get your volunteers more involved. Let’s chat about it in the comments below!