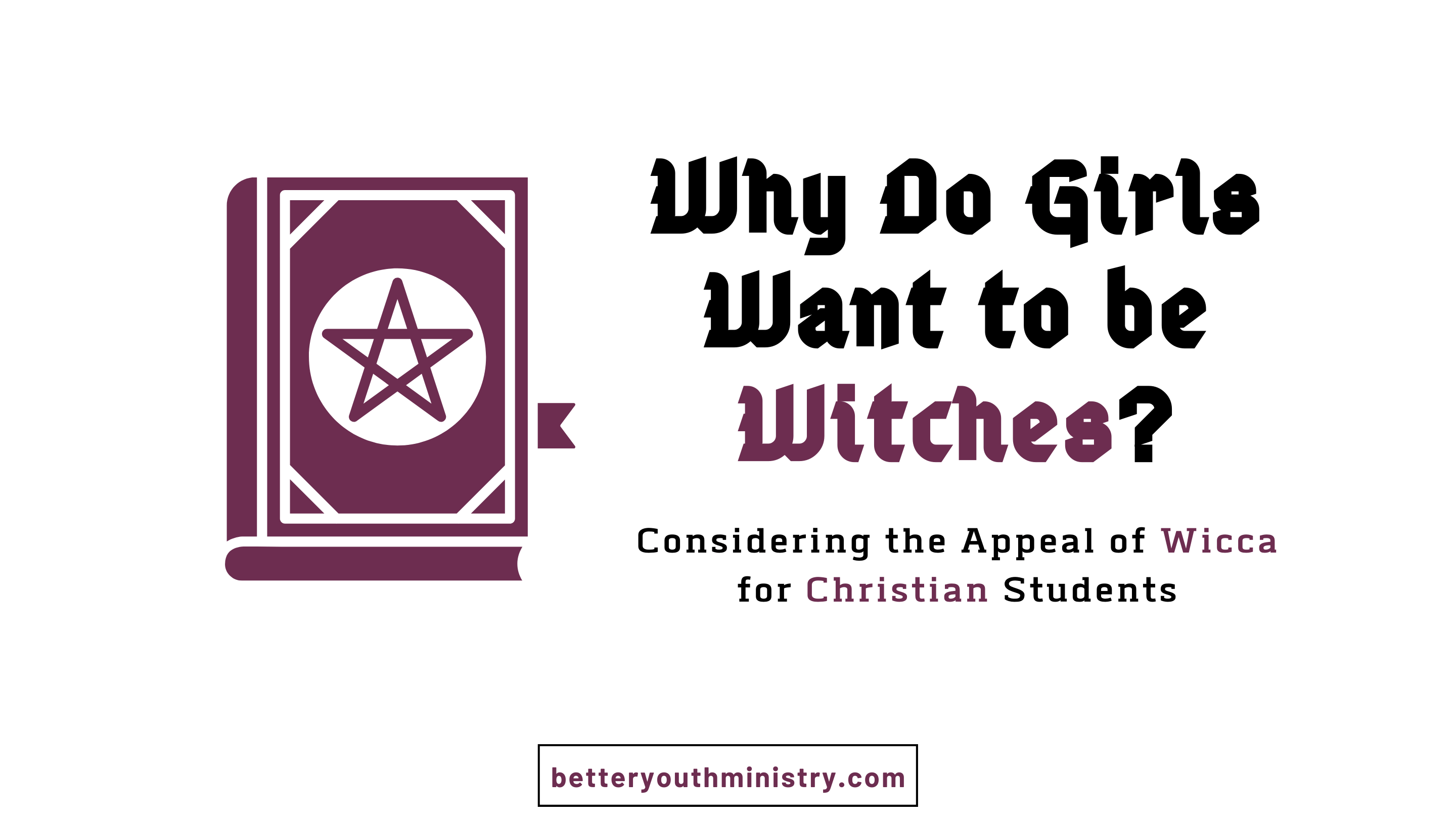 Most of us have heard of Scientology because of its celebrity members like Tom Cruise and John Travolta. But have you ever heard of Wicca? Many people haven’t. And that’s surprising, given the fact that there are an estimated 55,000 Scientologists and over 1.5 million practitioners of Wicca in the United States. To put that in perspective, there are more Wiccans than Presbyterians in the United States today.

A Brief Introduction to Witches and Wicca

To begin with, it should be recognized that even though Wiccans identify as witches, all witches aren’t the same. Witch is a label that can designate anyone from a sorcerer or shaman to a Neo-Pagan nature-worshiper. If someone identifies herself as a witch, you’ll want to ask what she means so you know you’re on the same page.

That said, the most popular form of witchcraft in Western cultures is Wicca. According to The HarperCollins Dictionary of Religion, “This religion looks to the pre-Christian nature religions of Europe, worships a Goddess and a God, and is devoted to promoting harmony with the natural world.”

Wiccan witches meet in covens, small gatherings of less than 20 people. The group typically gathers either in a home or in nature.for 8 festivals throughout the year (Feb 1, May 1, Aug 1, Oct 31, solstices, and equinoxes). The coven may also convene for new moons and full moons. What the worshipers do when they gather is left up to each group, as covens are autonomous.

Wiccans worship “the Mother Goddess,” along with her partner, “the Horned God.” In that sense, they are polytheistic (believing that there is a plurality of deities). But they are also pantheistic (believing that everything is permeated with divinity and, as such, is sacred). For their text, they use a version of the Book of Shadows. As far as the afterlife is concerned, Wiccans believe in reincarnation.

Why are so many people, especially teenage girls and young women, dabbling in witchcraft and becoming witches? I can think of five reasons, each with its own appeal for certain people.

Witchcraft is shrouded in mystery. That shouldn’t be surprising since much of its current form was developed by Gerald B. Gardner (in the mid-20th century) and informed by the rituals of secret societies. They do not necessarily seek to proselytize others. Instead, they add to their ranks through conversations with people who express interest and feel called to join.

As a kid, I remember seeing advertisements for Miss Cleo, a psychic who promised to reveal life’s mysteries through tarot card readings. Those advertisements made me curious. Was she legit? Was she a fraud? The only way to know would be to give her a call and find out.

Also, popular books and shows from Harry Potter to Game of Thrones feature various forms of witchcraft which can create a wishful, “What if” factor. The question, “What if someone could really do that?” sometimes leads to a different question: “What if I could do that?” From there, it’s a small step toward trying it for yourself, albeit tentatively and half-heartedly at first.

Witchcraft doesn’t feature specific statements of belief (dogma) or moral rules. This openness can be appealing to people who grew up around more organized and structured forms of religion, such as Christianity. A person who feels like she can no longer believe what the Church has told her to believe or no longer wants to behave in ways that the Church has taught might be attracted to the unstructured freedom that Wicca offers.

Most witches do try to abide by at least one rule, however: Do no harm (“Do as you will and harm none”). But, true to its pantheistic roots, good and evil are slippery categories, thought to function as two sides of the same coin. Wicca’s tolerance for others matches our current cultural mood nicely.

One analysis of witchcraft’s appeal says that “Millennials are seeking more freedom in their spirituality” and, as a result, “interest in astrology and tarot card readings have spiked in recent years.” David Brooks echoes this observation, describing New Age religious involvement as “spirituality without obligation” (Bobos in Paradise, 235). That is precisely what Wicca offers, and part of why it’s so attractive to so many people.

Human beings crave human relationships. We want to feel seen, heard, and known. And yet, in our hyper-connected society, people more isolated, left out, and lonely than ever before. The research of Dr. Jean Twenge has made this case over and over.

Maybe it’s because of social media. We can see what other people are doing, and we feel like we’re missing out. Or maybe it’s because involvement in local communities has become less of a priority. In Bowling Alone, Robert Putnam used the declining number of bowling leagues across the country to illustrate the larger point about how people were becoming more disconnected from each other. Community involvement has diminished to the point that many people don’t even know their neighbors’ names today.

We all want “our people,” to feel like we belong. In a very real sense, that’s what Wicca offers its practitioners. After going through training (which can last for up to a year), a person is initiated into the coven. At its best, the coven functions like a small group, a tribe, a point of connection with people who are with you on your journey. It’s inclusive and accepting, two of the highest virtues among Millenials and Gen Z.

The promise of personal, spiritual power is certainly an attractive part of Wicca, especially for females. Like every worldview or religion, witchcraft tries to answer three questions: Why are we here? What’s wrong? What’s the solution?

The story of witchcraft’s origins usually goes something like this: Witchcraft began in a pre-Christian time when women ruled, and everything was pristine because, well… girls rule. The guys got involved and made a mess of stuff. Now, girls need to take back their power – their voice, authority, and agency – and assert their say-so about what’s going on. “They call for women to usher in a new era of peace by throwing off the ‘shackles’ of ‘male-dominated monotheistic religions’ such as ‘Christianity and follow the goddess again in all her forms.'”5

This call to action is attractive to many women and girls today. That is at least in part because, according to David Brooks, “It is now better to be thought of as unconventional than conventional; it is better to be called a nonconformist than a conformist” (Bobos in Paradise, 233. As such, many witches (but not all witches) are also feminists.

On the spiritual side, the attraction seems to be the same as the cutting phenomenon. Why do people do it? There are many reasons, but ultimately it makes them feel powerful and alive in a new way.

If you’ve seen Tiger King on Netflix, then you’re familiar with Doc Antle. He made a comment in one of the episodes about how people can’t resist being around the unpredictable, exotic power of the tigers. There’s an adrenaline rush that comes from being in such close proximity to something that can hurt you. When you survive, you are drawn back to that euphoric rush again.

So, taking mastery over spiritual forces (or believing that you can) is empowering for people who feel like they have very little power or control over the other things in their lives.

Modern forms of Wicca claim to descend from ancient European cultures that pre-date Christianity. That claim is questioned by many, but the claim is part of Wicca’s attraction.

David Brooks suggests, “[W]e have encrusted our lives with superficialities, and we have to look back and rediscover some of the simpler and more natural ways of connecting with the world” (Bobos in Paradise, 240). As the world hurls forward into the unknown, it can be comforting to look backward, to recover a sense of structure, balance, and harmony.

Part of that balance is found through reconnecting with nature and oneself. Lighting a candle and watching the flame can help a person focus, as can meditation. Both are ways to reconnect with yourself and find inner tranquility.

As for nature, one Wiccan practitioner suggests simply going outside to interact with the natural surroundings. Holding stones is another way to build a bond with nature. This emphasis on nature has led many Wiccans to take up the cause of environmental activism.

Wicca and Christianity: Making It Personal

As I have learned more about Wicca, I can’t escape the sense that it’s essentially a power-play about saving the Earth and getting your own way, without the demands of a particular religious tradition. Scholars refer to it as Neo-paganism because it’s paganism wrapped in relativism, feminism, and environmentalism. It’s a perfect combination for many people today: Do what you want and do good. That’s the message that is resonating with teenage girls; it’s the message of Pantheistic Moralistic Therapeutic Deism.

Ironically, Moralistic Therapeutic Deism (without the pantheistic element) is what researcher Christian Smith has labeled as the dominant spiritual posture among young people today. It’s a spin-off of Christianity that uses some of the same language but bears little resemblance beyond that.

What might a Christian say to someone considering Wicca?

A Christian camp counselor emailed me about a girl in her group who said she’s dabbled in witchcraft and is thinking about becoming a Wiccan. She wanted to know how to talk about it with the girl.

Here’s what I suggested:
What she’s getting from witchcraft is probably a sense of personal empowerment and freedom. Maybe her church experience has taught her that God controls everything that happens, and that message has left her feeling like she has no “say-so” about the world or even her own life.

Practicing witchcraft, then, would be a way to rebel against that message (and possibly also her parents or some sort of church baggage that she hasn’t mentioned) and still feel connected to the world beyond her.

But here’s the thing: God has given us immense freedom and important responsibilities in caring for creation. He has empowered us to work toward the long-term flourishing of the world (that includes relationships with God, ourselves, and others). He has invited each person to be energized by his Spirit and join him in that project of filling creation with love and light (or, “good vibes”).

In that way, God (and Christianity in particular) already offers the real version of what witchcraft promises her. And witchcraft can’t ultimately deliver on what it promises. That’s how darkness works: It over-promises and under-delivers. It’s an imposter, a spin-off from the real thing.

If you want to press the issue with her, explain these things and then ask if she wants to stay in the shadows or walk in the light. Jesus, the light of the world, invites her to find her true self and her real power by following his path of blessing the world rather than exploiting it for her own purposes.

I wonder: What would you have said to that young lady?