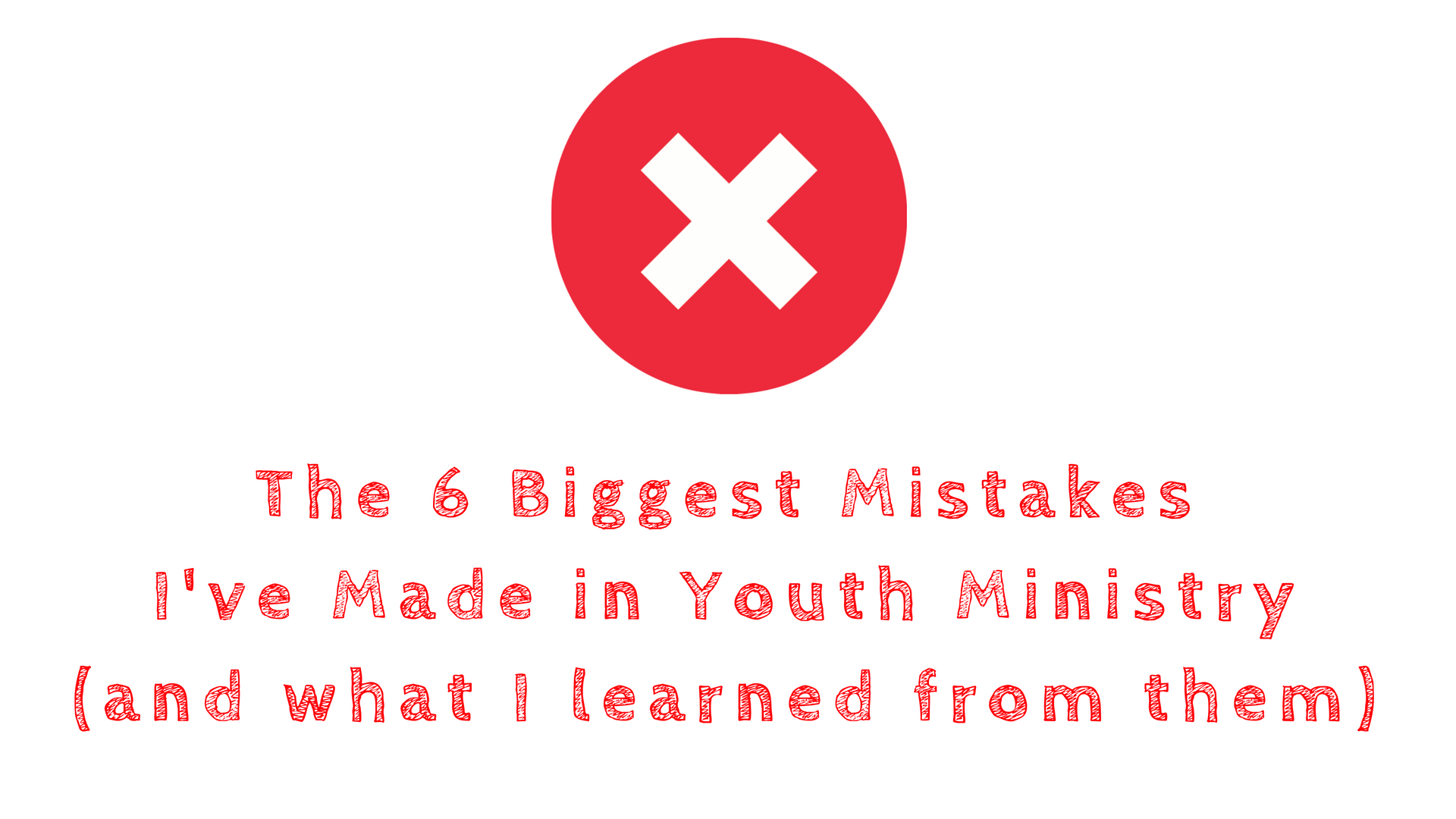 Mistakes aren’t bad unless you don’t learn from them.

If you make the same mistake over and over, don’t be surprised if you find yourself called into the pastor’s office to discuss your future at your church.

“My eyes are burning!”

One mistake that I’ll never make again is using regular shampoo for a slip ‘n slide! When I was a new youth pastor at a small church, I had a great idea for a Water Day. We had water balloons, water guns, and all kinds of water-themed activities.

One of those activities was a slip ‘n slide. I doused the tarp in shampoo and encouraged the students to dive on. The first student to try it was the pastor’s daughter. She ran fast and dove. She slid the whole way. It was great! It worked!

But then she started screaming. “My eyes are burning!”

I learned a valuable lesson that day:
If you’re going to do a slip ‘n slide, you’d better use baby shampoo.

I wish that was the only mistake I’ve made, but it’s not. In fact, it doesn’t even make it on the list of the 6 biggest mistakes I’ve made in youth ministry.

The 6 Biggest Mistakes I’ve Made in Youth Ministry

I had just become a youth pastor, so I did what every youth pastor did back then: I read Purpose Driven Youth Ministry by Doug Fields. That book explains how programs should have specific audiences in mind. For example, your outreach program will have a different agenda than your student leadership program. That makes sense.

What doesn’t make sense is how I applied that information (disclaimer: this mistake is not Doug Fields’ fault). I decided that our Wednesday night program would be reserved for student leaders. The only students who were allowed to attend were those who had gone through our Student Leadership 101 training. Students would show up on Wednesday nights and I would turn them away because the program wasn’t designed for them.

I can’t even believe it as I’m typing this right now! It was a huge mistake. Granted, I had no idea what I was really doing; I just thought I was applying what the book had said to do. But I was applying it in the wrong way!

After 3 weeks, I was asked to attend a deacon’s meeting to explain what I had done. Let’s just say it didn’t end well for me. We opened Wednesday nights back up to any students who wanted to attend.

I could have spared myself the embarrassment of that mistake by asking for input from key leaders before implementing new ideas on my own.

2. I kept bad volunteers too long.

It’s not hard to make a difference as a volunteer in youth ministry. If someone will show up consistently, have a positive attitude, care about students and point them to Jesus they’ll do great.

And yet, people will volunteer to work with students who can’t seem to get those 4 things right. I’ve had lots of those people in my ministries through the years.

In the early days, I would keep those people on the team. I was afraid I wouldn’t have anyone else to fill their spot. But seriously, they weren’t even filling their own spot!

Week after week I would wonder if they would show up. When they showed up they had a bad attitude. They weren’t prepared. They talked to everyone except for the students they were supposed to be leading.

And yet I kept them around. I guess I thought they’d get it. I figured they couldn’t be that bad for that long. But they never got it. The students under their care grew disinterested and eventually stopped attending.

I should’ve dismissed those volunteers after 3 strikes. Youth ministry is too important to leave in the hands of people who aren’t passionate about students.

3. I didn’t partner with parents.

In my early days, I imagined youth ministry as a partnership between me and my students. I didn’t understand or emphasize the role of parents in the equation.

Don’t get me wrong, I never talked badly about parents. I just never considered them as a major part of the equation.

Along came Reggie Joiner and Orange. When you mix the heart of parents (red) and the light of the church (yellow), you get orange. In his book, Think Orange, Reggie unpacks what he calls the 3,000/40 Principle. Basically, in a given year the church has 40 hours with a student. In that same year, parents have 3,000 hours with them.

It’s a mistake not to partner with parents.

Here’s 3 simple ways to parter with parents:
1. Set up a Meet-and-Greet Breakfast for parents and small group leaders.
2. Send monthly emails to tell them what’s being taught and how they can create opportunities for discussion at home.
3. Give them a 13th Birthday Blessing Guide (along with other resources like Cell Phone Contracts, etc.).

When you help parents win, you help students win.

4. I didn’t learn about the church.

I went through a long interview process with a church, but it was one-sided. They interviewed me, but I didn’t interview them. I still remember getting the phone call when they offered me the job. I accepted on-the-spot; no questions asked.

When I got started, I started noticing some things. When I noticed things, I asked questions. The answers I received weren’t great.

Apparently, the church was in a tough spot financially. I learned that I should ask if the church is meeting their annual budget and how that budget has changed over the last 5 years.

They had experienced major turnover. I learned that I should about the staff. Who has been there the longest? Who is the newest? How many staff members have left in the last 3 years?

The church’s attendance was higher than the church I was coming from, so I assumed everything was good. It didn’t occur to me that attendance at the new church could be in decline, which it was. I learned to ask about attendance trends over the past 2 years. To find out other things a new youth pastor should learn about, see my book, Your First 90 Days in a New Youth Ministry.

5. I played the comparison game.

In a classic case of learning that doesn’t translate into action, this was a mistake that I shouldn’t have made.

Doug Fields counsels new youth pastors to steer clear of the comparison game. He says, “When you compare you lose. Either you’re filled with pride because you’re better than another person, or you’re dejected because you don’t measure up” (Your First Two Years in Youth Ministry,, 29).

I was on the side of dejection. Other churches in town had more resources and more students than we did. I doubted about my skills, my calling, and myself.

Looking back, I see how misguided I was. At the time, however, I felt like I didn’t measure up. That’s how the comparison game works: you’re faithful, efficient, and effective in your own church (the place to which God has called you), but you still keep an eye on what everyone else has and what everyone else is doing.

Watching what others are doing isn’t bad; it’s a major way to learn. It turns bad when you compare what you have and what you’re doing to what they have and what they’re doing.

In their book, Boundaries, Henry Cloud and John Townsend define boundaries as “anything that helps to differentiate you from someone else, or show where you begin and end” (p. 33).

I was newly married when I was hired as a full-time youth pastor. I had no idea how to balance being a husband with being a youth pastor. Students would come to my house almost every night. That made it especially hard to have a date night with my wife.

If students weren’t coming over, I’d be out at their games. I’d get home and all the lights were out. My wife was already asleep.

I had no boundaries. Our marriage was strained. I started to blame youth ministry. In retrospect, with all of these years under my belt, now I would place the blame squarely where it belongs: on myself. I didn’t establish personal boundaries.

If I had it to do over again, I would set aside specific nights for my family. These would be non-negotiable. No students. No ministry.

There are two kinds of examples: what to do and what not to do.

In this post, I shared my mistakes. I told you about the things I know now that I wish I’d known when I first started in youth ministry.