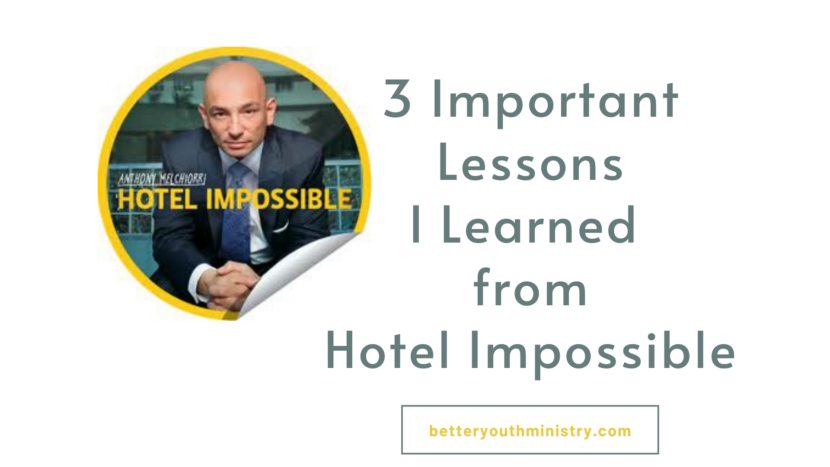 Hotel Impossible wrapped up its 5th season earlier this year.

In my opinion, it’s one of the best shows on TV.

Anthony Melchiorri, the show’s host, started his career at Embassy Suites in Times Square. It wasn’t long before he established himself and was offered a position as the night manager at the famous Plaza Hotel on Fifth Avenue in New York City. After 4 years, he became the Director of Front Office Operations.

He left the Plaza Hotel to become the General Manager at New York’s historic Algonquin Hotel, where he won numerous awards for service excellence.

On the series, he shows the uncanny ability to walk in, take control of the situation, make the necessary changes, and then hand it back over to the owners of the hotel. Of course, the $10,000 remodeling budget doesn’t hurt.

I love to see someone who knows his craft and cares about it enough to help other people do it better.

Here’s a clip from his visit to the La Jolla Cove Suites in Season 1:

From this clip, I learned 3 important lessons that I want to share with you.

1. We have insider language that doesn’t mean anything.

The girl at the front desk was very good. When I graduated from high school, I worked at the front desk at the Comfort Inn in my hometown. I wasn’t as good as she was! She interacts with guests, smiles, and speaks clearly. But she uses a slogan that means nothing: “World-Famous La Jolla Cove.” It reminds me of Buddy the Elf walking into the little New York coffee shop that had a sign that said, “World’s Best Coffee.” He said, “You did it! Congratulations! World’s best coffee. Great job everybody!” Of course, it’s just a saying, a slogan…and it’s meaningless.

Action Step: Identify something your church says that it doesn’t really mean.

2. Giving people a bunch of details leads to information overload.

3. Update the look and feel, but don’t forget where you came from.

In a world where everything changes, people value roots and longevity. When something has staying power it carries a sense of dignity. People assume that it’s lasted as long as it has because there’s something to it. Even though the hotel updated the processes with technology and renovated the rooms, they kept telling the story of how they started, who they are, and what they do.

Action Step: Let your past energize your future.

If you’ve never watched Hotel Impossible, you should definitely check it out. In every episode, you’ll discover several transferrable principles that are relevant to you, your youth ministry, and your church.

Question:
What do you think Anthony Melchiorri would say if he visited your church?