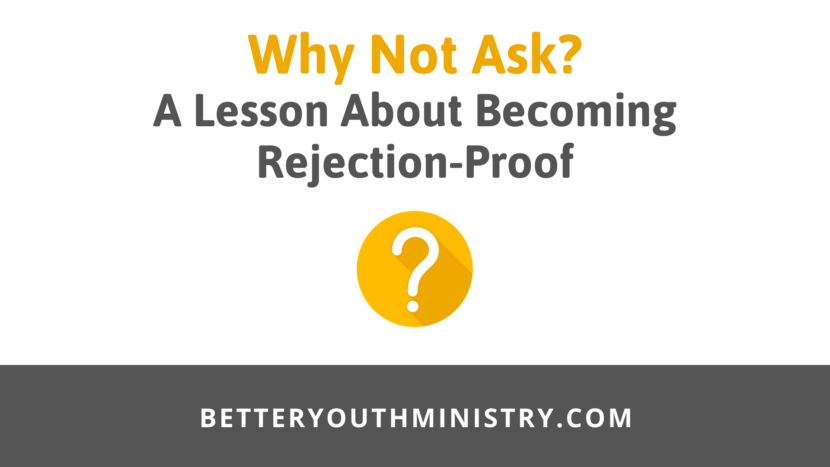 Jia Jing quit his corporate job to create an app and pitch it to investors. But, after four months of pitching his idea, all he’d heard was, “No.”

He started to doubt himself. Months of rejections weighed heavily on him. He dreaded his next meetings, afraid that the new investors would reject his idea like the ones before them had done.

Then he reached a moment of clarity.

He had to get better at hearing “No.” The solution he found was an obscure practice called Rejection Therapy. Basically, he would intentionally put himself in situations where rejection was the likely outcome in order to lessen the sting of it.

His journey and the lessons he learned from it are cataloged in the book, Rejection Proof: How I Beat Fear and Became Invincible Through 100 Days of Rejection.

On Day 7 of the process, Jing went to Costco and asked if he could make an announcement over the store’s intercom. He explained that he wanted to tell everyone how much he loved Costco. The manager told him that the store doesn’t have an intercom. Rejected.

However, some of the employees carry walkie-talkies, so Jing asked to make his announcement that way. The answer was still no. But then the manager did something unexpected. He asked, “Are you hungry?” and proceeded to give Jing a free meal at the store. It’s a fascinating exchange. You can watch the video and see for yourself.

Throughout his 100-day experiment, Jing got some yes’s and some no’s, but the moral of his story is that you never know until you ask.

What’s the Worst That Could Happen?

In these unprecedented days, we’re all scrambling to keep things together and going in our churches and ministries. So many changes have happened in the last few weeks that it’s hard to keep track of it all. It’s hard to know which of those changes will stick and which ones won’t after this COVID-19 episode is over, but the innovation has been inspiring.

I noticed on Instagram that the junior high ministry at Mariners Church in California had Nick Foles, an NFL quarterback, on their online service for students last Wednesday night. That was surprising and unexpected.

I don’t know if they had a prior relationship, but it got me thinking…

Everyone’s stuck at home right now. That includes the Christian athletes, artists, actors, and influencers that so many of your students look up to. Why not reach out to a few of them on social media and ask if they would be willing to show up for your Zoom group or pre-record a short, inspirational message for your students?

What’s the worst that could happen? I guess they could say no, or just not reply. But what does it cost you to reach out and try? Nothing. That’s the lesson from Jin Jang.

Think about it. You (and your students) might be surprised about what can happen.