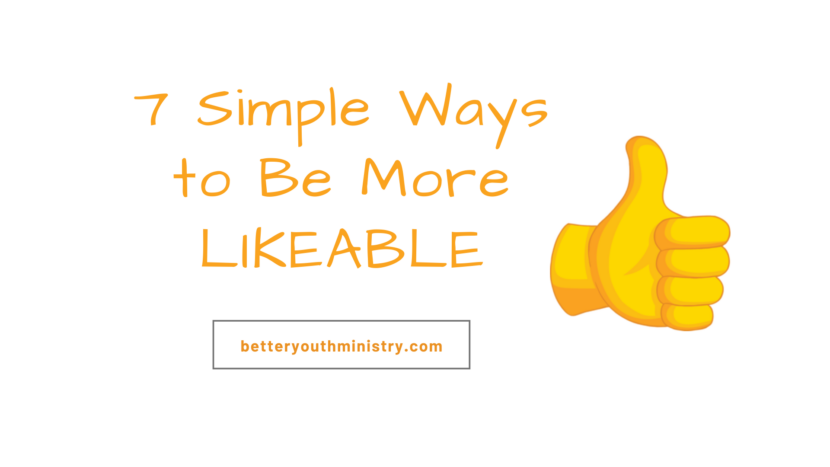 You want to be liked. I know you do.

I want to be liked too.

It falls somewhere between levels 3 and 4 on Maslow’s Hierarchy of Needs.

Sure, you don’t have to be liked to be successful in Youth Ministry. But it’s a lot more satisfying if you are.

In its simplest form, likeability is the ability to create positive feelings in other people.

Tim Sanders, the guy who wrote the book on this subject, offers a more sophisticated definition:
Likability is an ability to create positive emotions in other people through the delivery of emotional and physical benefits” (The Likeability Factor

Unfortunately, likeability isn’t something I learned about in school.

I guess my teachers thought left-brained “hard skills” would take me farther in life than right-brained “soft skills.”

If only they’d seen the Columbia University study by Melina Tamkins. Ms. Tamkins discovered that workers who were popular with people were seen as trustworthy, motivated, serious, decisive, and hardworking. Meanwhile, their less-liked colleagues were perceived as arrogant, conniving, and manipulative.

It turns out, your success might actually be determined by how likeable you are.

I worked at a church where the previous youth pastor was asked to leave because he wasn’t liked. He had a history of making humiliating comments to students. He thought he was being funny and provocative, but everyone else thought he was just being rude and mean. He actually had good skills as a youth pastor, but people didn’t like him so he had to go.

7 Ways To Be More Likeable

Because likeability is such an important factor in your success in Youth Ministry, I want to share 7 ways that you can be more likeable.

“If you want to be a likeable leader, start with being human” (Karen Friedman, Shut Up and Say Something

People like people who are honest, authentic, and sincere. Lying, hypocrisy, and insincerity will ruin your relationships and your likeability. Don’t exaggerate. Learn to say, “I don’t know.”

2) Respect people who aren’t around.

Psychologists have discovered an interesting phenomenon called, “Spontaneous Trait Transference.” Basically, when you’re describing the person you previously worked for, or the attitude of the person who took your order at lunch, the people you’re talking to project those same traits on to you. In effect, what you say about other people is perceived as being true of you too. Be careful what you say about other people.

3) Be generous with compliments.

“The most fundamental and straightforward way of winning with people is to give them a compliment – a sincere and meaningful word of affirmation” (John Maxwell, 25 Ways to Win with People

We all have a hunger for attention, affirmation, and appreciation. Look for ways to encourage people with a compliment, and your likability factor will be on the rise.

4) Pay attention when people are talking.

I find myself in a lot of conversations with people who are distracted by other things. Sometimes it’s their cell phone; other times it’s a television in the restaurant. Either way, it’s clear that they aren’t interested in me and what I’m saying. Don’t be a distracted listener. Don’t be an interrupter either. Instead, follow the advice of David Schwartz:
“Practice conversational generosity… Let the other person talk to you about his views, his opinions, and his accomplishments” (The Magic of Thinking Big

Sometimes people share things with you that they’re excited or worried about. If it’s a student, maybe she’s nervous about a big math test coming up next week. It could be a college acceptance letter that’s yet to arrive. Maybe a grandparent is having health issues. Whatever the case, when someone shares something that’s on their mind, be sure to follow up with them after a few days. Doing so will communicate that you were really listening and that you really care.

When you’re really listening and paying attention to what someone is saying, you’ll pick up on their passions and needs. Maybe a parent is going through a divorce. Who can you connect them with who has already walked that road? Maybe you have students who have leadership potential. What are some resources that you can give them to help them take the next step? If you help people get where they want to go, they can’t help but like you.

If you help people get where they want to go, they can’t help but like you.

Whether it’s Chick-fil-A, Outback Steakhouse, or your house, something special happens when you share a meal with someone. Food can tear down walls of hostility among enemies and strengthen bonds of unity among friends. In our hyper-connected culture, what’s in short supply is human attention.

Many people are starved for attention. Email is the dominant mode of communication because it’s expedient, but it’s also cold and dry. The phone is a little warmer because you can hear voice inflection and tone. The most effective mode of communication by far is face-to-face. Everyone has to eat, so why not share a meal with someone and get to know them better?

How likeable are you?

Take the FREE Likeability Assessment (it won’t take you more than 10 minutes) and post your score in the comments below.

Do you think likeability affects your success in Youth Ministry? Why or why not?