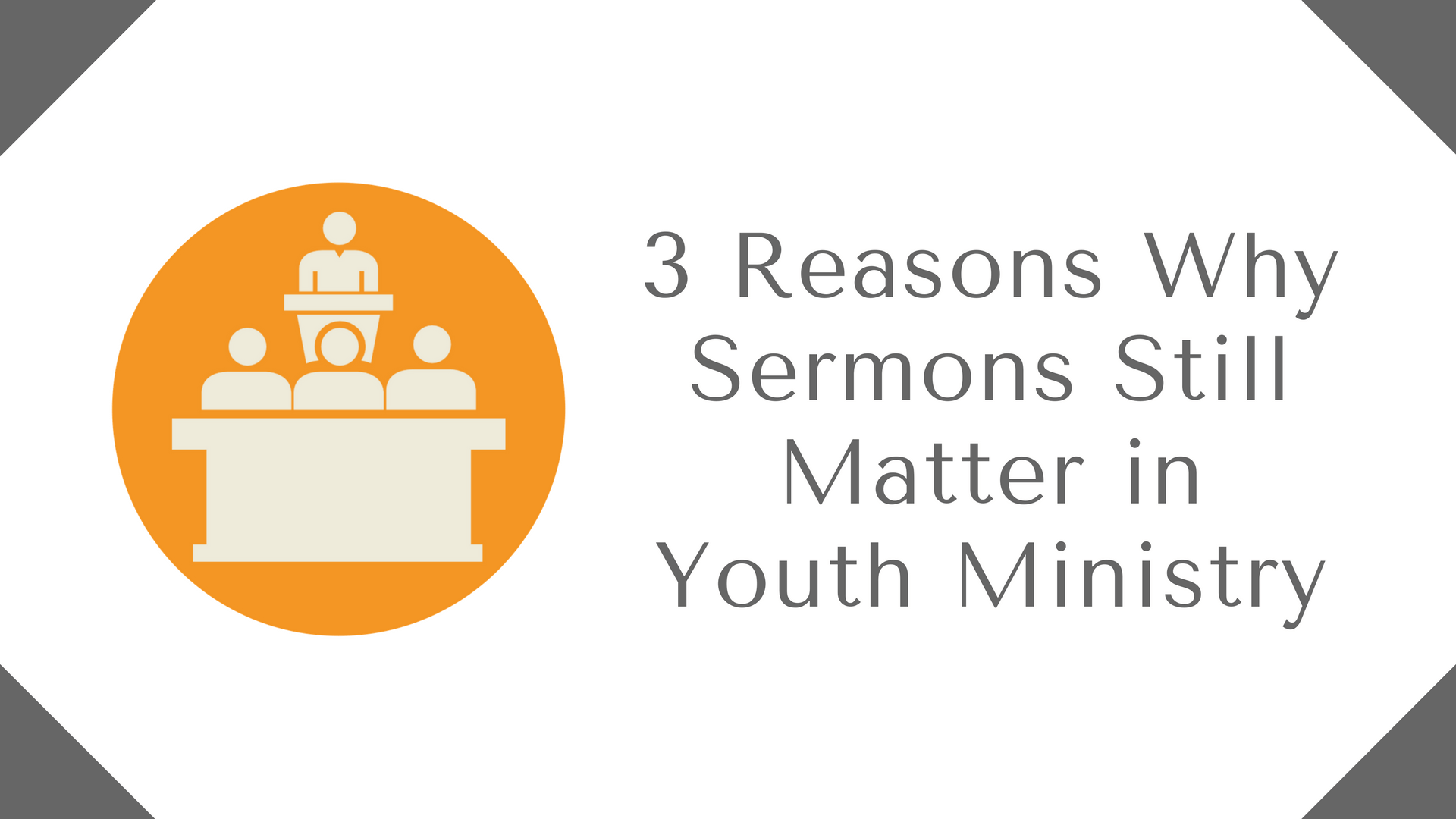 In their pursuit of fun games and planning future events, youth pastors don’t always give their sermons the attention they deserve.

That is a mistake.

Your weekly sermon is one of the most important things that happens in your ministry.

Each week, when you get up to speak, you have an opportunity to set the tone and shape the culture of your ministry. The words you say – the verses you choose and the illustrations you use – can determine the direction of your students’ lives for years to come.

I’m not trying to minimize the other aspects of your ministry.
I believe you should strive for excellence in everything your ministry does (that’s why preaching is only one of the 5 P’s that I help youth pastors develop), but in talking with other youth pastors, I have begun to sense a trend: their sermons have taken a backseat to other stuff.

As the weeks build up and students grow up, that steady stream of sermons will have prepared those students for a lifetime of faithfulness. But it happens week after week, sermon after sermon.

Do you remember RadioShack?

The company was founded in 1921. It sold radio parts and random supplies, mostly through catalogs. It struggled for the first 40 years before it was bought by Charles Tandy, the owner of a leather company that wanted to diversify his portfolio.

Tandy inherited a chain of nine existing RadioShack stores that were underperforming. He got to work, quickly identifying the 20% of the products that produced 80% of the sales revenue. He slashed the number of products from 40,000 to 2,500 and replaced the large retail stores with several smaller locations.

New technologies were making their way into American homes, and people enjoyed tinkering with all the new possibilities. RadioShack focused its business on connecting with those do-it-yourself types. In its heyday, they had 7,000 stores across the country.

According to one business writer, “RadioShack entered the 1980s poised to be the center of the computer revolution” (Steven Davidoff Solomon, “A History of Misses for RadioShack,” September 16, 2014).

There was just one problem.

They lost their focus. Charles Tandy died in 1978, and RadioShack left their core business in his absence. They were after the next big thing but ended up with nothing.

They tried computers but were beat out by IBM and Apple.
They tried phones but lost to Motorola and AT&T.
They tried boomboxes but were bested by Sony and JVC.
More recently, they were undercut by Amazon and outperformed by Best Buy in everything they did.

In the final analysis, “RadioShack tried many paths. But going in all directions without a full commitment is not enough, particularly when the core brand is not sustained. RadioShack has branded itself well but it led itself too far from its strengths” (Solomon, “A History of Misses”).

They filed for bankruptcy in 2015. Here’s a question for you:

Have you been giving your sermons the attention they deserve?

RadioShack fell when it failed to focus on its core brand. I believe that the sermon is part of your core brand. Without a powerful sermon, you are simply gathering students for a fun time.

I know that’s not why you’re in ministry. You have been called by God to proclaim the message of the gospel. I’m a big fan of having fun in youth ministry, but all of the fun you’re creating is a means to that end.

In a sermon, you use words to describe the God who creates, sustains, and redeems the world. With your words, you expose the lies and uncover the truth. Your words also empower students to join together for a cause that is bigger than themselves.

That’s what you’re doing with every sermon you preach.

If you forget that, then people will eventually say the same things about your ministry that they’re saying about RadioShack now: it had so much potential, but nothing ever came of it.

Why are sermons so important?

1. In your sermons, you describe God.

For a presentation to be a sermon, it must call attention to God. God is the creator, sustainer, and redeemer of the world. Life has value and purpose because it was God’s idea.

When you speak to students, tell them about the God who created, sustains, and redeems the world.

2. In your sermons, you expose lies (and uncover truth).

False narratives pervade the hallways of schools and brainwaves of students. Classmates and commercials combine to tell them that they aren’t pretty enough, cool enough, smart enough, or strong enough to matter. Students are battered with advertising messages that they don’t have what it takes to make a difference. However, those advertisers are quick to point out that if students would use their products, then things could be different.

In the sermon, you have an opportunity to undo those lies. Expose them. Call them out. Name them and shame them. Replace those lies by uncovering the truth. C. S. Lewis explains the message this way:
“God made us: invented us as a man invents an engine… Now God designed the human machine to run on Himself. He Himself is the fuel our spirits were designed to burn, or the food our spirits were designed to feed on. There is no other” (Mere Christianity, 54).

The search for purpose and belonging must begin with God, or it is doomed to fail. When you speak to students, help them see the lies and believe the truth.

3. In your sermons, you empower students.

Your students want to be included in something that is bigger than themselves. When I preach to students, I want them to feel both uplifted and energized, not just as separate individuals but as a united group. I want them to understand that they are not on their own; they’re together in the fight of faith. Part of that fight is to enlist them in work that matters.

Martin Luther described sin as, “Man curved in on himself.” That is a picture of the shrunken, solitary life. Narcissus, the character from Greek mythology who was entranced by his own reflection, provides a vivid example of this condition. According to Eugen Peterson, “Narcissus got smaller and smaller until there was no Narcissus left: he had starved to death on a diet of self” (Christ Plays in Ten Thousand Places, 243).

As a pastor, you must preach and yearn for your students to be gripped by a vision for something more than their own comfort and convenience. Challenge them to serve and contribute in the church. Spark their imaginations by telling them about a mission trip they can join. If you want students to have a sense of significance, give them something significant to do together.

It is time to reclaim the primacy of the sermon in youth ministry. We all know that playing games and having fun are both important. After all, if students don’t enjoy attending your church, they’ll stop coming. However, in the Great Commission, Jesus doesn’t say, “Make them want to come back next week.” He says, “Teach them to obey everything I have commanded you.”

The sermon is central to your calling. It is part of your core brand. Don’t let other things distract you from giving it them time and attention you know it deserves.

When you stand up to speak, you should have 3 objectives:
1. Describe God.
2. Expose lies (and uncover truth).
3. Empower students.

This week, I challenge you to spend twice as much time working on your sermon as you spent last week.