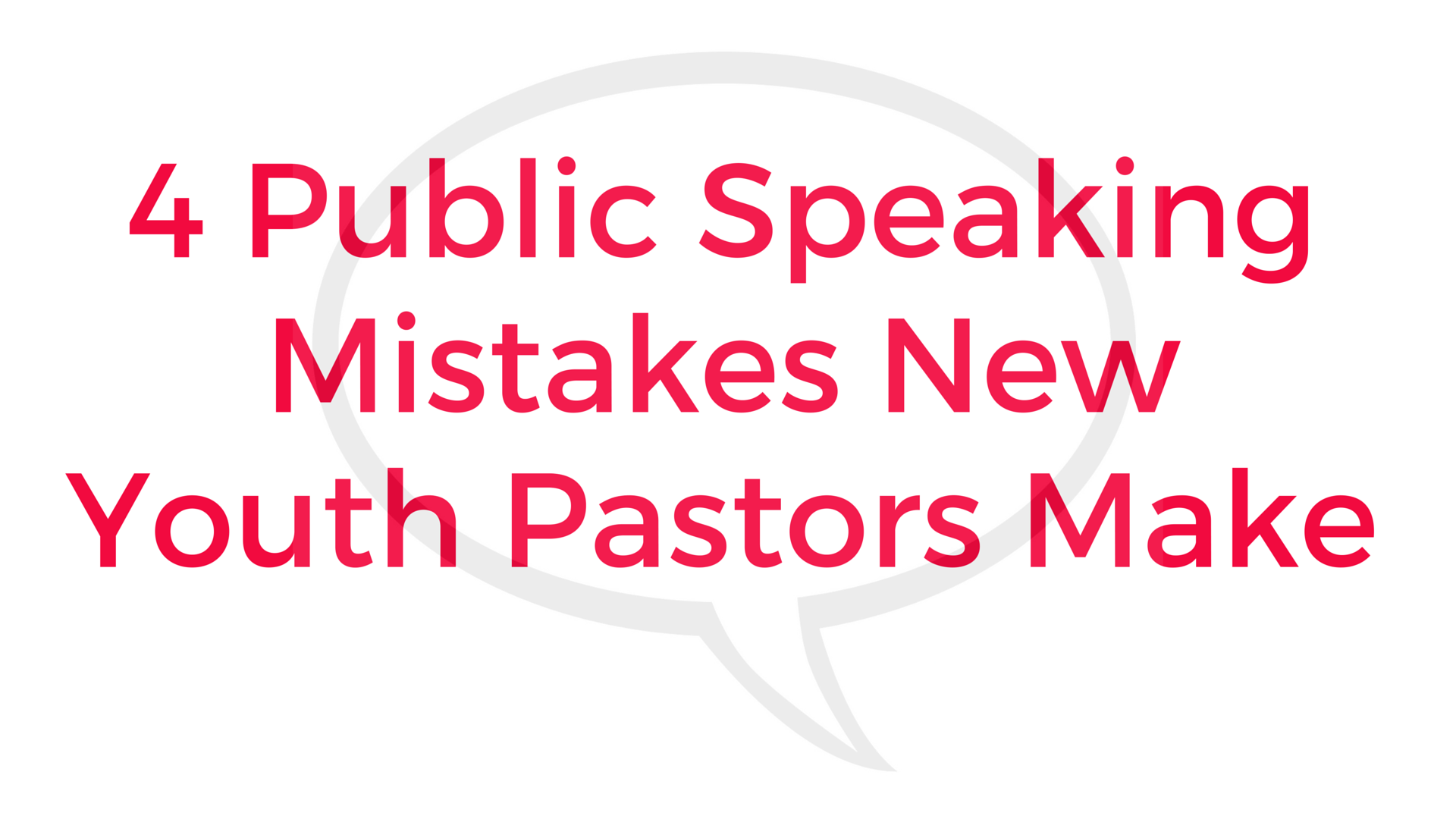 You can spot him, can’t you?
The guy who tries really hard not to look nervous.
The guy who sounds like the preachers he grew up listening to.
The guy who crams too much information in one message.
The guy who is glued to his notes.

You know the guy I’m talking about. Maybe you are that guy.

More often than not, that guy is a new youth pastor. Those are the mistakes that new youth pastors make because they haven’t had a chance to get the repetitions that they need to get comfortable on stage yet.

Recently, I spent a few hours coaching a seminary student who was struggling with each of those things in his new position as a part-time youth pastor.

We’d already talked a few times about his manuscript. He’d uploaded the document on Google Drive, and I was able to recommend some edits that he made.

Then I met him at his church and we got to work. It’s the kind of work that’s uncomfortable, but incredibly valuable…much like recording your talks and listening to yourself.

He got on the stage and delivered the message to the empty student room as if there were students in the room. I sat at the computer and clicked through the slides in ProPresenter.

Right from the start, I could tell that he wasn’t comfortable. He was fidgeting. He was pacing. He was talking way too fast. He was radiating a ton of nervous energy.

I stopped him and said, “If you aren’t comfortable, your students won’t be comfortable. You have to appear confident, not nervous.”

“How do I appear confident?” he asked.

I gave him 5 pieces of advice:

We’ve all heard speakers fumble through some words at the start of their message and then say something like, “Sorry. I’m really nervous right now.” It’s an appeal for sympathy from the audience. The speaker knows he isn’t performing well and he’s trying to keep people from thinking less of him.

But I agree with Garr Reynolds who says, “The presentation is about the audience. Telling them how nervous you are does not serve their interest. Acknowledge to yourself that you are nervous – and that it is normal – but do not share this information with the audience” (The Naked Presenter

If you can’t find anyone who’s with you, then imagine your mom in the audience…she’s always in your corner!

I’m convinced that we become nervous when we feel like we aren’t adequate to meet the task at hand. We think that the moment is bigger than us. It’s not true. You have to believe that you and your message are enough to meet these people in this moment.

5. Stand in a power position.

Power posing is a concept made popular by Amy Cuddy’s TED Talk. She found that positioning your body in certain ways actually increases your confidence. Nervous people try to limit their footprint. They close off. They put their hands in their pockets (not in a relaxed way). They cross their arms.

One of the best ways to increase your confidence and decrease your nervousness as a speaker is to stand with your feet shoulder-width apart. You want to take up space on the stage.

After that mini-lesson on overcoming nervousness, we moved forward to address a few other things.

The next thing I picked up on was his tone. It was strong, but too aggressive. His points felt like accusations.

It sounded like he’d listened to one too many John Piper sermons. Don’t get me wrong, I think John Piper is an excellent preacher, but his style is his style. He has a doctorate degree and spent three decades at the same church. Not only that, but he speaks to adults, not middle school students.

I tried to explain to this guy that speaking like John Piper would alienate students, not attract them.

I said, “Instead of casting yourself as a preacher, you’ll do better to share your message as a caring friend or older brother. That will create a more conversational tone that the students will listen and respond to.”

That suggestion softened his tone and put him in a different frame of mind.

We edited the talk down to one key point. We crafted a tweetable statement that would be the “Bottom Line” or “Big Idea.” It was the one thing that he wanted the students to remember, even if they didn’t remember anything else. If they got that point, the message would be successful.

The last thing we did was create a story with slides.

He had two screens in the room, one on either side of the stage. But he wasn’t using them to help tell the story of his message. He had slides for his key points and the Bible verses, but that was it.

As I listened to his talk and scrolled through the slides, I saw an opportunity to add to the story. In his talk, he mentioned that he was part of the marching band. So I did a quick Google image search and added a picture of a marching band to show on the screens.

He talked about how a lanyard was a status symbol in his high school, so I added a picture of a lanyard.

He made a key statement that I thought was too important for the students to miss, so I created a slide with that statement on it.

We ended up with a presentation in which the slides didn’t simply give information; they told a story.

I was pleased to get this text message from him after I got home that night:

I learned more in a few hours from you today than I have all semester in class. Thank you so much!

He’s a new youth pastor, but he’s on his way to looking like a veteran soon.

If you’re a youth pastor and you would like some help with your speaking, please contact me. I’ll be happy to review your manuscript or evaluate your audio or video file. I guarantee you’ll be satisfied with the results!