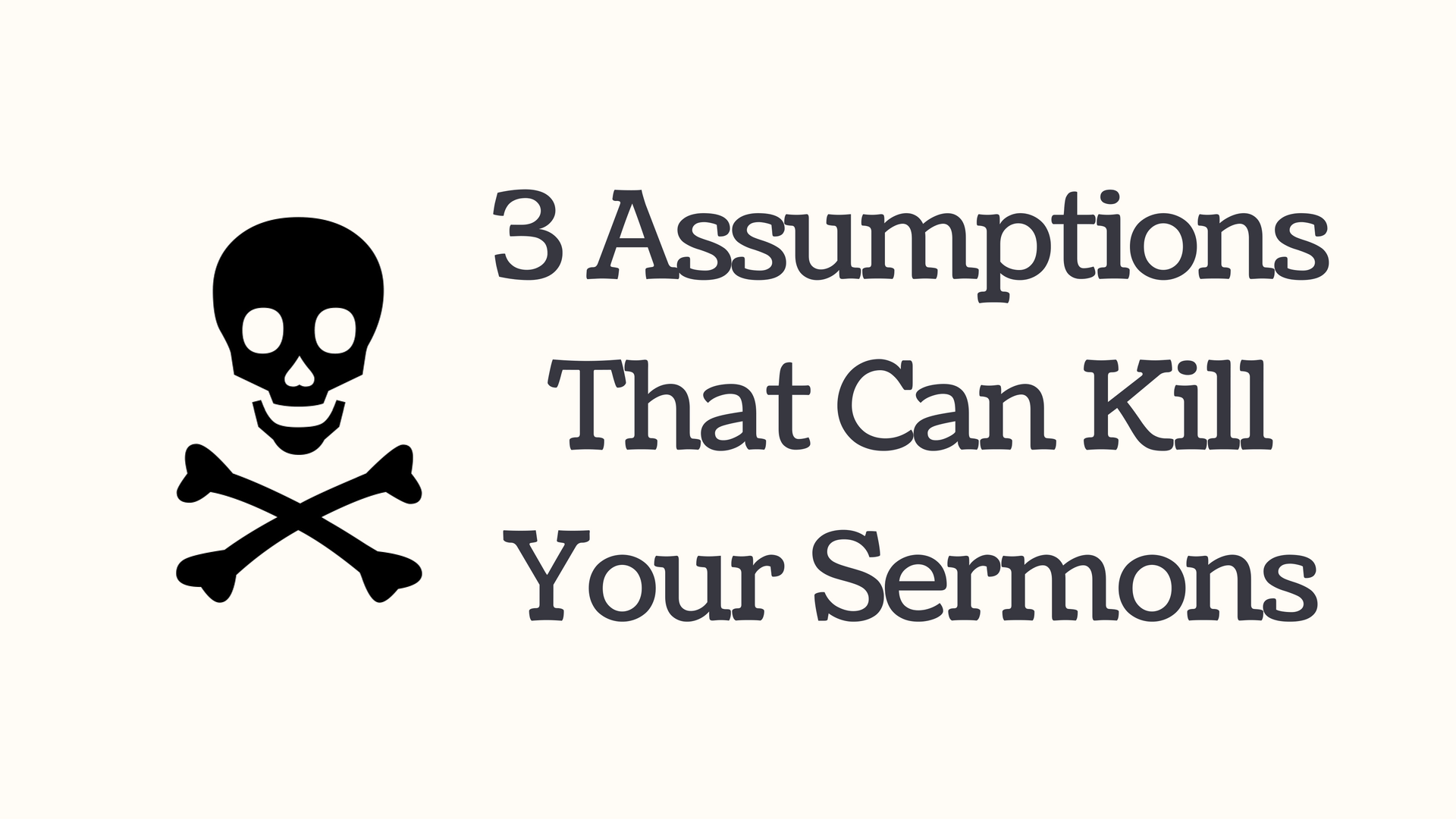 Have you seen the television show called, “Adam Ruins Everything“?

Adam Conover serves as the host who uses humor and logic to debunk our long-standing assumptions about everything from how much water we should drink to why orange juice isn’t really natural.

Here’s a clip to whet your appetite:

He goes on, “Making assumptions simply means believing things are a certain way with little or no evidence that shows you are correct” (p. 187).

It is necessary for us to make assumptions because they keep us from having to use our limited mental energy to think through the same things we sorted on on previous occasions. When we make assumptions, we make unconscious predictions about the way things will go. Those predictions allow us to use our mental energy on new issues or challenges that demand our attention.

Sometimes, you need to challenge your assumptions.

For example, when my son was 4 years old, my wife and I tucked him into bed, said goodnight, and sat down to watch a movie in the living room. A few minutes later, my son came out of his room.

“I don’t feel good,” he said. I immediately assumed that he felt fine; he just didn’t want to go to sleep. We paused the movie and I walked him back to his room. A few minutes later, the scene repeated itself.

This time, however, after he announced that he didn’t feel good, he threw up all over the floor!

My assumption was wrong.

Maybe that’s why Isaac Asimov, the late professor of biochemistry at Boston University, said, “Your assumptions are your windows on the world. Scrub them off every once in awhile, or the light won’t come in.”

We all have assumptions that need to be challenged.

This is especially true when it comes to preaching in youth ministry. One assumption that I often encounter in conversations with youth pastors is that students should be able to sit still and absorb a 35-minute sermon.

This assumption is well-intentioned:
We love God and we love talking, so it makes sense that we would want to talk about God for as long as we can.

Keep in mind, however, that even though your favorite preachers preach for 40 minutes, they have two things going for them that you and I don’t:
1.They are excellent at their craft (that’s why they’re your favorites).
2.They are speaking to adults.

Here’s why those two things matter:
You and I are still growing as speakers. Most of us haven’t made it onto the list of anyone’s favorite preachers. Not only that, we speak to students, not adults. So, I would recommend that you finish your sermons in less than 25 minutes.

If TED Conference speakers can explain the complexities of neuroscience in 18 minutes, it shouldn’t take you much longer than that to talk about the Prodigal Son.

How about 3 more assumptions to avoid?

Three Assumptions That Can Kill Your Sermons

In traditional churches, the pastor ascends to the podium, clears his throat, and announces his sermon text. At that point, the Scripture is read and the sermon begins.

This approach assumes people care what the Bible says about a given topic. In my opinion, that is a faulty assumption today. Most of your students aren’t sitting around wondering if their actions are acceptable to God. They aren’t searching the Scriptures to see if their behavior aligns with God’s instructions. For many, their desire to be cool is more important than their desire to be Christian.

Your fancy sermon titles and professional graphics might make you feel good, but they don’t automatically make students care about the topic you’re talking about. Instead, you have to spend time in your sermon creating a palpable tension that students want you to solve.

Andy Stanley advises, “Focus on the question you are intending to answer until you are confident your audience wants it answered. Otherwise, you are about to spend twenty to thirty minutes of your life answering a question nobody is asking” (Communicating for a Change, p. 125).

Elsewhere he says, “Before I draw people’s attention to a solution, I want to make sure they are emotionally engaged with the problem” (Deep and Wide, p. 240).

If you’ve watched Andy’s sermons, you’ll know that part of his appeal is that he assumes people don’t care about his topic. His task, then, is to convince them that the topic has vital implications for their lives.

You have a similar task when it comes to your sermons. Don’t assume students care just because they’re there. Raise questions. Discuss issues. Create tension.

Then – and only then – are you ready to move on to what the Bible has to say about your topic.

I was playing basketball in the driveway with my son when a few kids from the neighborhood came over to join us. After awhile, they got bored and wanted to play something else. They all went to my garage and saw random supplies for weird games. They were pumped up about the possibilities!

But, in their excitement, they asked, “Why do you have all this stuff?”
“I’m a youth pastor,” I explained.
“What’s a pastor?” they asked.

That was an eye-opener for me. Those kids ranged from 4th grade to 7th grade, but not one of them knew what a pastor was. One kid thought he might know. He said, “I think that’s somebody who works at a church or something, right?”

These are the students that your students invite to your programs. They’re the ones who show up at your church for the first time.

When you preach, you can’t assume that everyone knows what you’re talking about. They don’t.

That means you have to define your terms more carefully. You can’t just talk about God. Students will fill that idea up with their own presuppositions about who God is and what God is like. You have to clarify which God you’re talking about and why it makes a difference.

You can’t just mention the Gospel, atonement, fellowship, or baptism and think that everyone in the room is on the same page. They’re not. Half of them won’t even know that Moses lived before Jesus.

Beware of saying things like, “You remember the story about Achan’s sin in the book of Joshua, right?” They don’t. Many of them have never even heard of it. You have to tell them. Explain everything.

Now, you might create thick tension to make students care and provide thorough explanations in to help students understand what you’re talking about, but there is still another assumption to consider.

Beyond caring and knowing, there is the all-important factor of believing. Students who don’t believe what you’re saying will still show up to hear you say it.

I remember showing up at Young Life club in high school. I wasn’t a Christian. I didn’t believe what they were saying, but I went anyway.

Why did I keep showing up?

I think I kept going for 2 reasons:
1. My friends were going.
2. The leaders let me proceed at my own pace.

The second reason is the focus of this point. When the Young Life leaders gave their talks week after week, I got the sense that they believed what they were saying even if I didn’t.

What did I believe? I had no idea. But they didn’t make me feel small for my unbelief. They didn’t threaten me with talk about Hell. Instead, they gently challenged me by saying and showing that God wants what is best for me. That meant that God and I were on the same page; we were working toward the same goal. I believed that.

Over time, it became clear that Jesus needed to become the Lord and Leader of my life, but it wasn’t a quick conclusion. The leaders gave me space to sort it out. They were open and available to answer questions I had. They preached in a way that left room for my doubts, while also making a case for Christian faith.

The whole process reinforces what Andy Stanley says:
“When people are convinced you want something FOR them rather than something FROM them, they are less likely to be offended when you challenge them” (Deep and Wide, p. 245).

Don’t assume students know what you’re talking about. In preaching, your task is to give them reasons to believe by answering their questions in a way shows Christianity is both intelligible and desirable.

Assumptions are dangerous things to make, no more so than in your sermons. Sermons are important in youth ministry, so it is important that you kill these assumptions before they have a chance to kill your sermons.

In summary:
Don’t assume students care. Create tension, raise the stakes, and help them see why they should care.

Don’t assume students know. Tell them what you mean, explain everything, and aim for clarity.

Don’t assume students believe. Inspire, empower, and equip them to find their own answers and discover their own faith.