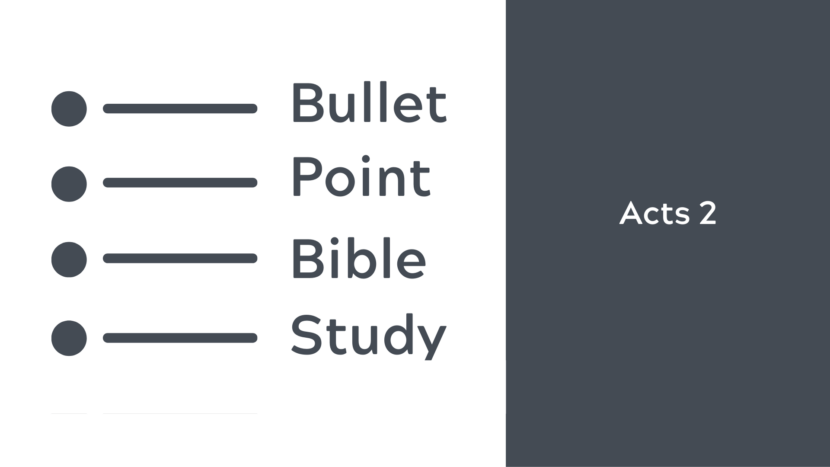 The tallest trees in the world are Redwood trees. They’re enormous, easily growing over 300 feet tall. But have you ever thought about Redwood seeds?

The tallest tree in the world right now is a Redwood named Hyperion. It was discovered in 2006 and stands 379.7 feet tall. But even Hyperion started out as a small seed.

Redwood seeds are so small that a million of them put together only weigh around eight pounds! And yet, when one of those seeds takes root and grows, it produces a tree that people come from miles around to see.

Christianity has over 2 billion adherents around the world today, but it wasn’t always that way. In the days after Jesus’ resurrection, there were around 120 believers who were huddled together in Jerusalem (Acts 1:15), waiting and praying for what came next.

In this chapter, the small seed of a group starts to grow. And that leads to the first bullet point that I want you to see:

• When the Spirit moves, people notice.

The small group of believers has gathered in a house in Jerusalem. It’s Pentecost, fifty days after Passover. At Passover, the Jewish people remembered their deliverance from slavery in Egypt; at Pentecost, they remembered the Law that God gave them at Mt. Sinai.

Both festivals were “pilgrimage festivals,” meaning that Jewish people came to the Temple in Jerusalem from all over to celebrate. That’s why Luke reports that “there were devout Jews from every nation living in Jerusalem” (v. 5).

A sound like a roaring wind fills the house, and something like flames appears and settles on the gathered group (vv. 2-3). This is the moment they’ve been waiting for: “Everyone present was filled with the Holy Spirit” (v. 4a).

As a result, they start to speak in other languages. These languages aren’t some sort of heavenly language, like what Paul mentions in 1 Corinthians 12-13. The people who heard the commotion run to see what’s happening, and they’re surprised that they understand what’s being said in their own languages (v. 6).

What were the believers saying? They were proclaiming that “wonderful things God has done” (v. 11b). The spectators are “amazed.” The word is used twice to describe the crowds’ reaction (v. 7, 12). And they ask, “What can this mean?” (v. 12).

Think about it:
When was the last time you told someone about what God has done in your life?

• God’s promises are fulfilled in Jesus.

Peter steps up and connects what’s happening to what God promised would happen (v. 16). He cites a text from the prophet Joel about how God would pour out the Spirit upon all people, and they would prophesy.

Most importantly, “Everyone who calls on the name of the Lord will be saved” (v. 21). One scholar points out that “this could be the first occasion in which an Old Testament passage referring to God is referred to Jesus, the exalted Christ as a . . . representative of God” (James D. G. Dunn, The Acts of the Apostles, p. 29).

Peter rounds off his sermon with a quote from Psalm 110, also written by David. He aims to leave no shadow of a doubt that God has made Jesus to be both Lord and Messiah (v. 36).

So, what should the people do about it? Peter tells them to turn from their sins to God and be baptized. “Then you will receive the gift of the Holy Spirit” (v. 38). Three thousand people were baptized that day.

Think about it:
How would you explain who Jesus is to someone else?

The new community is a devoted one. Specifically, the new believers are devoted to “the apostles’ teaching, and to fellowship, and to sharing in meals (including the Lord’s Supper), and to prayer” (v. 42).

The scene is a stark contrast to what happens so often today. It’s unfortunate, but “contemporary religious life is plagued by momentary enthusiasm, periodic outbursts, and superficiality” (William H. Willimon, Acts, Interpretation, p. 39). The first believers are set against that approach.

This was not a mandatory set up; it was voluntary. The Spirit worked in their lives to give them a deep sense of awe” (v. 43), and a new sense of family. They had converted to a new way of life, the way of Jesus. And they were deeply committed to it, and to him, and to each other.

Two words stand out to describe this community: joy and generosity (v. 46b). God had saved them. They were forgiven and free, and it was only natural to celebrate that fact and share it with others. They didn’t cut themselves off from the outside world. Instead, they enjoyed favor with people, and people joined their movement every day (v. 47).

Think about it:
How would you describe your commitment to your community of faith?

So, to recap, here are the bullet points from Acts chapter 2:
• When the Spirit moves, people notice.
• God’s promises are fulfilled in Jesus.
• Converted people are committed people.