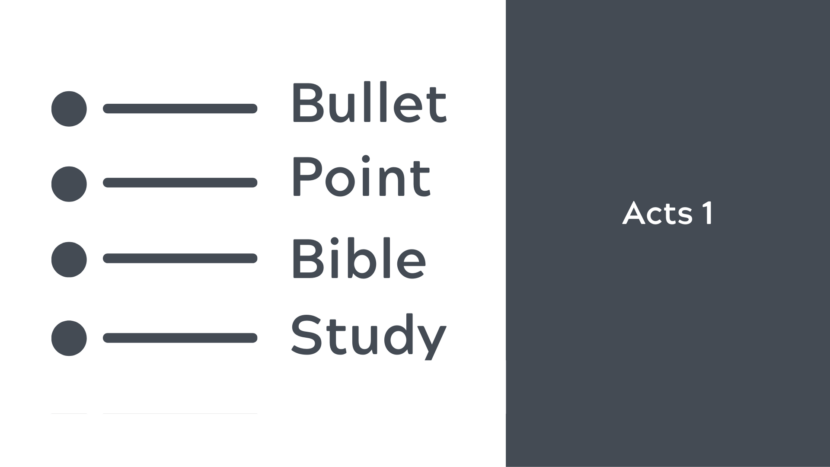 If you’ve ever found yourself in a situation where the path forward wasn’t clear, then you’ll be able to identify with what’s going on in this chapter.

I remember feeling like that when my son was born. I had talked to some people and read some books about how to be a dad, but there was nothing that could prepare me for actually doing it!

Then, just as soon as I got the hang of being a dad to a little boy, my wife and I had a daughter and those feelings of uncertainty popped up again.

In this chapter, Acts 1, the very first followers of Jesus find themselves at the place of uncertainty, the odd space between what’s now and what’s next. And that leads to the first bullet point that I want you to see:

The book of Acts opens where Luke’s Gospel left off. And that makes sense because Luke is the author of both books. We know this because of verse 1, “In my first book I told you, Theophilus, about everything Jesus began to do and teach… (NLT).

The “first book” was the Gospel of Luke – which was also addressed to Theophilus – and the sense is given that now, in the second book – the book of Acts – Luke will describe “what Jesus is continuing to do and teach” (N. T. Wright, Acts for Everyone: Part One, p. 2) through the Holy Spirit and the apostles.

Luke tells us what Jesus did in the forty days after his crucifixion and resurrection: “He appeared to the apostles from time to time, and proved to them in many ways that he was actually alive. And he talked to them about the Kingdom of God” (v. 3 NLT), which was the dominant theme of Jesus’ teaching during his earthly ministry.

It’s important to note that there would be no movement in Jesus’ name if it weren’t for the resurrection. When Jesus died, his followers’ hope died with him. They were scared and confused, hardly interested in or capable of continuing what he had been up to. It was only through their encounters with the risen, resurrected Jesus – both personally and collectively – that their hope came back to life and the movement took shape.

• The mission of the church requires the power of the Spirit.

In verse 6, the apostles ask Jesus, “Lord, has the time come for you to free Israel and restore our kingdom?” (NLT). Jesus says that only the Father has authority over that, but, in the meantime, they have a job to do. Jesus says, “You will be my witnesses, telling people about me everywhere – in Jerusalem, throughout Judea, in Samaria, and to the ends of the earth” (v. 8b).

In the ancient world, a witness did the job of a herald, going throughout the territory announcing whatever news they had to share. According to Jesus, this is now their task, to announce that Jesus is now enthroned as the Lord of the world. And the geographical movement mentioned in verse 8 is thought to provide a sort of outline for the book. The first seven chapters are “in Jerusalem, “throughout Judea and Samaria” happen from 8:1 to 11:18, and the rest of the book explains how the gospel finally reached Rome.

In order to fulfill their role as witnesses, they’ll need the power of the Holy Spirit (v. 8a), and for that, they have to wait. Jesus is taken into a cloud in verse 9 (the cloud is a symbol for the glorious presence of God), and an angel says he will return from there one day. That’s what Christians are talking about when they talk about the Second Coming.

So those first followers of Jesus gathered, and waited, and prayed. According to verse 14, “They all met together and were constantly united in prayer.” That’s how they prepared themselves to be filled with God’s Spirit, and we’re wise to follow their example in that.

Groups of all kinds need leaders to provide vision, direction, and organization, and Peter steps up as a leader in verse 15 to address the group of believers. Not long before this, Peter had denied knowing Jesus three times on the night of Jesus’ arrest, but Jesus restored him in John 21 after the resurrection. It calls to mind Jesus’ statement that a person who has been forgiven of much will show much love, but a person who feels like they’ve only been forgiven a little will show little love (Luke 7:47).

Here, Peter addresses the elephant in the room. One of the twelve apostles – Judas – is no longer there, and it’s time to choose his replacement. They need to have twelve apostles, not just eleven. “The total of twelve was significant [because] it corresponded to the number of tribes in Israel, and may have marked the apostles out as leaders of the new [or renewed] Israel” (F. F. Bruce, The Book of Acts, NICNT, p. 44).

Not just anyone would do. Verse 21 tells us that the replacement would come “from among the men who were with us the entire time we were traveling with the Lord Jesus” (NLT). This person also had to be a witness to the resurrected Jesus.

Two men are nominated – Justus and Matthias – and Matthias is ultimately chosen as the replacement. Nothing else is said about Matthias in the rest of the New Testament, but later church tradition says that he became a missionary to the Ethiopians.

In the church, people play all sorts of different parts. We all have a role. Sometimes we’re chosen to play the part of Matthias. Other times we’re called upon to do something different, like Justus. The key is to play our parts as faithfully as we can. People in small roles should perform without shame, and people in larger roles should perform without pride. After all, we’re all in this together.

So, to recap, here are the bullet points from Acts chapter 1:
• The story of the church continues the story of Jesus.
• The mission of the church requires the power of the Spirit.
• The community of faith needs faithful leadership.

Think about it. Which of these points is the most important for you to remember today?